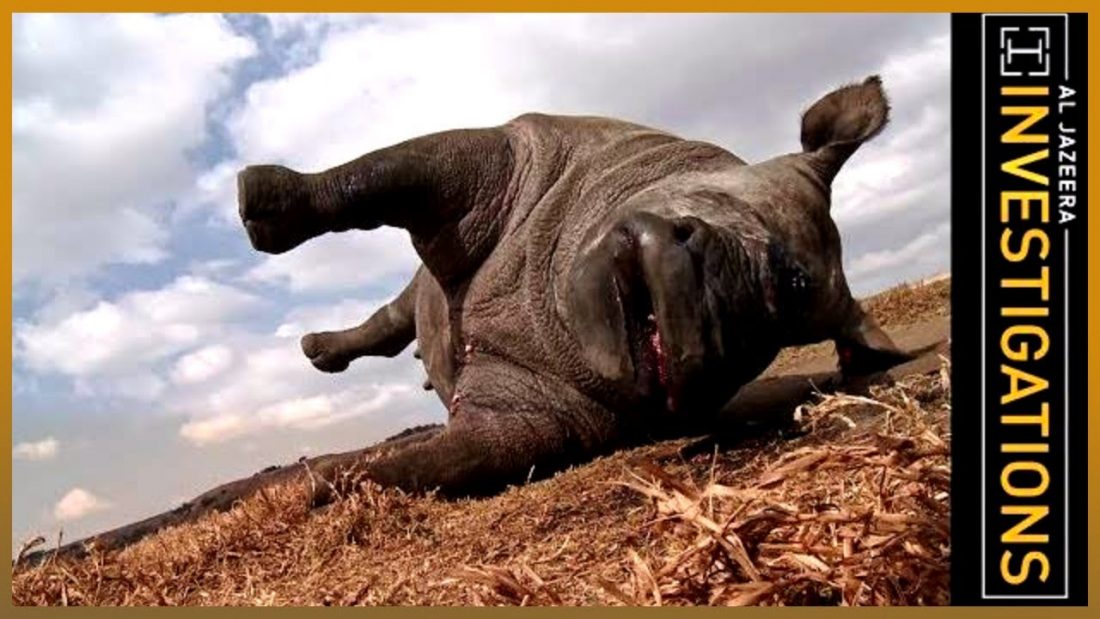 In a six-month long investigation, an Al Jazeera team penetrated a network of dealers, agents and traffickers who profit from the multi-million dollar trade in rhino horn. In a piece of undercover journalism of the finest order, investigators filmed the documentary, ‘Al Jazeera Investigates – The Poachers Pipeline’. and aired it on 13th November 2016 in the week that two major international events took place – a public hearing of the Wildlife Justice Commission WJC in The Hague before a Panel of Experts and the 3rd International Conference on Illegal Wildlife Trade in Hanoi. Al Jazeera shows that the poachers are the bottom end of a five-tiered criminal chain extending from the kill in Africa to the consumer in Asia.

According to the channel, South African State Security Minister David Mahlobo has allegedly been hanging out with Guan Jiang Guang, a Chinese “businessman”, massage parlor owner and purportedly a rhino horn trafficker. The video also shows a Chinese restaurant owner saying that “there are many weirdos in South Africa who are obsessed with animal protection. That’s dangerous and troublesome.”

In front of the undercover investigator, Guan openly bragged about bribing South African justice and immigration officials. “He came to my massage parlor every week, or at least twice a month,” Guan says in the video “I know him well … [He was] a guest at my home”. Mahlobo, however, denies the claims. Mahlobo is also the man who allegedly said, without proof, that the ex-Public Protector, Thuli Madonsela, was a spy for the CIA. In Al Jazeera’s documentary Nigel Morgan, chairman of Focus Africa Foundation, alleges similar statements of Mahlobo as reasons to terminate his company’s contract of an overseas funded anti-poaching operation in the Kruger NP. Morgan’s operation had successfully caught Chinese rhino horn smugglers who were then bizarrely released to disappear. Mahlobo is now considering suing Al Jazeera and several publications over reports of his alleged link to a rhino poaching syndicate.

Jeff Radebe, a senior adviser to President Zuma, told journalists on November 16th 2016 that “Cabinet noted the allegations in a documentary against Minister of State Security David Mahlobo,” and that “The South African Police Services are investigating the allegations.” The Hawks, confirmed investigations were underway into the alleged links between Mahlobo and Guan. The Democratic Alliance (DA) has called on President Jacob Zuma to place Mahlobo on special leave pending a full and proper investigation into his relationship with Guan.

In a second meeting with the undercover investigators, Guan also boasted that he had an “untouchable” connection at Beijing Capital International Airport who has “absolutely no problem” smuggling rhino horn into China. Weeks later, the AJ investigator met Guan’s contact in China’s Fujian Province. In a parked car the contact showed him a 2.25 kg rhino horn.

On January 19th 2017 The Citizen reported that Guan had disappeared without a trace, despite an ongoing investigation and the affirmation of Hawks spokesperson Brigadier Mulaudzi last year that they are currently collecting more data to build a strong case before handing it over to the NPA.

Mulaudzi also said that Guan’s Mbombela Spa is a suspected brothel. In the same article The Citizen quotes Francois Beukman, chair of the parliamentary portfolio committee on police, that the police would be quizzed on the matter when it appeared before the committee. “The [Directorate for Priority Crime Investigation] DPCI is coming to the portfolio committee on Wednesday, 1 March 2017, to brief us on … [high]-profile cases, so we will request them to give us a detailed briefing on this matter…” said Beukman.

The AJ investigators also reported that members of a high-level delegation, accompanying Chinese President Xi Jinping to South Africa in 2015, bought rhino horn and “a lot of” ivory. The delegates had diplomatic immunity, which ordinarily prevents customs officials from searching luggage. A spokesperson for the Chinese Embassy stated that “public officials are prohibited from purchasing [of] any endangered wild species or wildlife product. [Officials] that are involved are subject to severe punishment according to law and regulations.”

The documentary also examines evidence of high-ranking Vietnamese officials, including Le Huy Hoang, Viet Nam’s ambassador to South Africa, have visited or have ties to a game farm in North West that is owned by prominent Vietnamese businessman and alleged rhino horn kingpin, Michael Chu.

Al Jazeera cooperated with the Wildlife Justice Commission (WJC) in The Netherlands and obtained exclusive footage shot secretly Nhi Khe, the village where the horns of an estimated six hundred rhinos have ended up in illicit shops. Despite WJC handing a massive dossier of evidence to the Vietnamese Government on over fifty dealers in the village selling horn, ivory, tiger skins and lion bones, no official action has been taken to close down the trade. The recent wildlife conference location in Hanoi is only twenty miles from this village.

Involvement in the rhino horn trade also extends to North Korea’s SA embassy. In December 2015 the Department for International Relations had asked a senior diplomat to leave after he and a taekwondo master were arrested in Mozambique with 4.5kg of rhino horn and ca. $100 000 in cash.

South African Hunting and Game Conservation Association (SAHGCA) CEO Fred Camphor called for an urgent investigation led by an independent judicial commissioner into allegations that Minister Mahlobo and other government officials are associated with individuals involved in international wildlife trafficking, bribery and corruption. Camphor said a vast amount of donor funding, time and expertise had been invested through private sector initiatives to stop rhino poaching and the allegations of ministerial involvement with individuals involved in rhino horn crime syndicates flew in the face of game rangers that risked their lives every single day in the war against rhino poaching.

In an article published in the Daily Maverick on November 16th 2016, Judith February, a governance specialist, columnist and lawyer, stated “it has long been suggested that the illegal rhino poaching in South Africa is happening on such a large and sophisticated scale that there may well be people of influence and power either benefiting from it or turning a blind eye to it. It is for this reason that the allegations against Mahlobo must be investigated urgently. Allegedly, it’s Mahlobo’s wife who has dealings with Guan but it would be rather curious (to say the least) for the Minister of State Security to have no knowledge of his wife’s business dealings” .

In this over two decades old report Lt. Col. Pieter Lategan stated that “a legal market in rhino horn will certainly depend on the ability of marketers and law enforcement officers to distinguish between legally and illegally obtained rhino horn. The use of isotopic analysis as a control mechanism for and before a legal trade must be supported. The research and the acquisition of a database is costly but absolutely necessary. A market-oriented study of the rhino trade in Asian countries must be carried out. This, with all due respect, should be done by a properly qualified analyst and not be a well-known scientist. We have had enough contrasting reports and still do not know what happened to the 336,000 kilos of rhino horn that disappeared between 1970 and 1990.”

African Indaba readers who are interested in Lategan’s 1994 report “The Role of the Endangered Species Protection Unit (ESPU) of the South African Police in Combating Rhinoceros Poaching and the Smuggling of Rhino Horn” may request the report from the African Indaba Publisher.