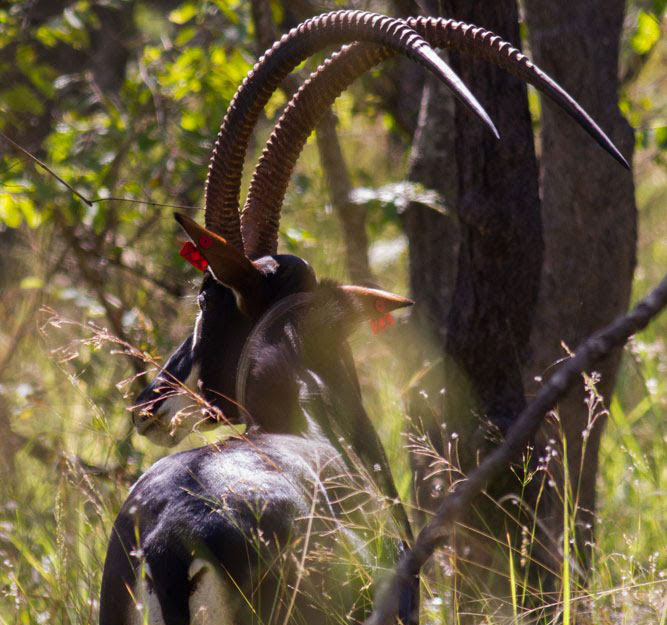 Good rains continued until the very late end of the rainy season in May. After the draught in the previous year the generous rains allowed the regeneration of critical functions within the local ecosystems. This excellent news makes us optimistic for the continuing recovery of giant sable populations.

In Cangandala, the copious rains gave way to abundant grass, a lot of grass really; tall, thick, and everywhere. By end of May the soil was still too moist and the floodplains full of water, and by mid-June, when we finally could venture off- track, a thick wall of grass made progress a nightmare.

The long and intense rainy season has various and additional predictable consequences; probably a lot less surface will burn in 2018 both in Cangandala and Luando, although there is a risk that if the next rainy season is delayed, the unusual accumulation of combustible material may cause exceptionally severe wild fires in September. We struggled to make controlled burnings to promote mosaic micro-habitats and regrowth of vegetation for the dry season in highly favored sable feeding spots. Still, we managed to partially burn some patches on the main floodplain and some small areas on a couple anharas. These will surely become grazing and browsing hotspots for the animals shortly after in the dry season. 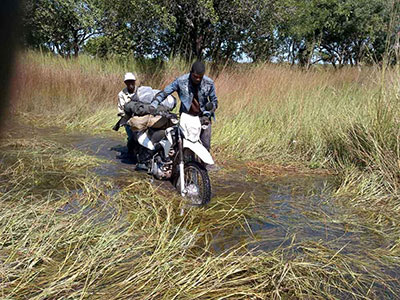 As result of the terrain conditions, we struggled to approach the sable herds in Cangandala. The females were quite dispersed and shy, surely a consequence of calving, or nursing their newborns. We could confirm that the big bull we had named Mercury was still routinely patrolling his favorite area. This suggests he still maintains the undisputed position of a dominant bull. We could ascertain that the younger bull Eolo is becoming more impressive by the day … his horns are beautifully arched and imposing. It is probably only a matter of time until Eolo challenges his elder sibling; it may not take that long for him to become number one and the new master bull in Cangandala.

For Luando we had high expectations to increase monitoring and extend security measures across its vast wilderness areas, but the rainy season limited our movements. Throughout the rains it is impossible to drive a 4×4 vehicle off-road in the reserve, and even the few main sand roads become quickly impassable. The most efficient solution are bikes and we deployed three brand new Honda bikes along existing foot paths. However, we had underestimated how wet the conditions had become, and with the woodland becoming completely flooded in many places, the bikes had to be carried too often; long patrols turned into a nightmare. A new plan is now in the works to be implemented during the dry season; it will evolve around building access roads and deploying advanced ranger camps deep in the bush. These camps will be reached with 4×4 vehicle in the dry season and quad bikes during the rains.

The stepped-up security measures initiated in the previous year are producing encouraging results. The semi-permanent presence of two senior rangers, well equipped, supplied and fully motivated, has been a game changer. The endorsement and direct link of our senior rangers maintain to the Angolan military provides additional power. Their message is clear: the giant sable is a national symbol and sacred.

However, poaching is far from eliminated and poachers are likely lurking and readjusting to the increased pressure. With training exercises scheduled for the second semester, we hope to further increase security on the ground.

In the meantime, seven animals, four males and three females were still being tracked via GPS satellite collars until the end of June. These collars completed two full years of operation, sending GPS positions every four hours. They may not last that much longer now, but their impact has been extraordinary, by giving us in-depth knowledge and pioneering data on the biology and behavior of giant sable. The GPS positions also allowed to pinpoint the home ranges of various herds with extreme accuracy. Throughout the first semester we were able to witness how different bulls moved across their territories and interacted spatially with other bulls and herds, and we could even infer interesting breeding and calving behavior in females.