Book Review: Call of the Mild – Learning to Hunt My Own Dinner 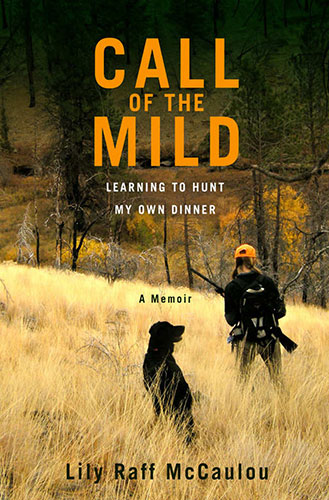 When Lily Raff McCaulou switched from an Indie film production career in New York to a reporting job in Bend, central Oregon, she never imagined that she’d find herself picking up a gun and learning to hunt. She’d been raised as a gun-fearing environmentalist and an animal lover. In fact, her husband said “when we first met, I classified her as an anti-hunter.”

The young woman’s transformation from a New York City urbanite into a small-town Oregon hunter with a conscience started when her husband taught her how to fly-fish. By own admission fly-fishing was her gateway drug to hunting. Interviewing Oregon ranchers and loggers, many of whom hunted, for her articles, made her discover an astonishing lifestyle connected to nature. Hunting, which she had long associated with cruel and indiscriminate killing, started to intrigue her. The more she researched, the more she came to believe that true hunters were in fact environmentalist role models. And after Lily finally started hunting herself, she realized that killing, and eating a hunted animal created an intimate bond to another creature and, by extension, the land where that creature lived. Throughout the book, the author shares her mostly profound insights.

In her book, Lily explores modern humanity’s alienation from the natural world, and all the big questions surrounding hunting in the 21st century: gun legislation, tensions between hunters and environmentalists, and new models of sustainable and ethical food procurement. She contends that hunting is not only a cultural tradition, but an ecological necessity and argues that hunters are common-sense conservation partners for all nature lovers.

In an interview Lily Raff McCaulou said “To hunt, I have to immerse myself in the landscape. There’s no room for talking or daydreaming. I scan the ground for animal scat or tracks. I listen for snapping twigs or flapping wings. I feel which direction the wind is blowing. I identify the plants around me and notice if their stalks have been nibbled or their roots burrowed under. Hunting requires fluency in an ecosystem— something that is increasingly rare in our modern lives. It connects us to our ancestors because it gives us a window into what humans used to have to do to stay alive. And because hunting roots us to the land and to the wildlife, it gives us a great reason for conservation.”

Call of the Mild is most of all brilliantly narrated – personal, self-critical, amusing, deeply moving and factually informative. It is a book not only for your own library, but also an ideal gift for your non-hunting friends!

Lily Raff McCaulou is a journalist based in Bend, Oregon. Her website is www.lilyrm.com. Read more in Elle, The New York Times and The Oregonian.

Listen to interviews with Lily on Talk of the Nation, Q with Jian Ghomeshi or OnPoint with Tom Ashbrook.