Book Review: End Of The Megafauna: The Fate Of The World’s Hugest, Fiercest, And Strangest Animals

Silvio Calabi reviews Ross D.E. MacPhee’s book End of the Megafauna: The Fate of the World’s Hugest, Fiercest, and Strangest Animals. For all its intellectual rigor and occasionally academic language, MacPhee’s book was written for lay people. The last chapter shows how the fossils of giant bears, mammoths and saber-toothed cats could point to astonishing future developments. 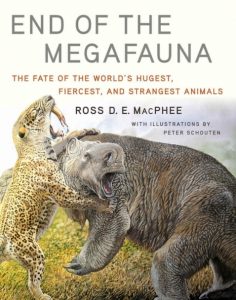 These Near Time extinctions—of cats, deer, kangaroos, turtles, buffaloes, bears, elephants, sloths, camels, horses, birds and more, many of them considerably larger than today’s versions—took place more or less concurrently across large swathes of the world. Why? How? Did sudden climate change kill them off? Did humans hunt them to death—all of them, everywhere? Or was their complex food web disrupted somehow? Perhaps some exceptionally lethal disease circled the globe, extinguishing so many of these beasts that, in our wild heart of hearts, we’d give a great deal to be able to see today? (Clearly, they weren’t managed for sustainable use.)

Ross MacPhee heads the Division of Vertebrate Zoology in the Dept. of Mammalogy at the American Museum of Natural History in New York City. In a stellar career, MacPhee has published many papers and taken part in more than 50 scientific expeditions to the far corners, including both Poles. Such a combination of lab and field work qualifies him to discuss and weigh each of these hypotheses in some detail—and none of them seems likely to have been the culprit, at least by itself.

For all its intellectual rigor and occasionally academic language, the book is semi-scientific because it was written for lay people, to show us what the fossil record indicates took place back then—where and when and to which species. Peter Schouten’s wonderful paintings of animals, extinct and extant, illustrate the text, but they also take us into those lost worlds. We see the Appalachian Plateau, the Madagascar Highlands, the savannas of southern Africa, the pampas of South America, and much more, populated as they surely were, thousands of years ago.

The past often can point to the future, and MacPhee’s last chapter is, in some ways, his punch line: “Can the Megafauna Live Again?” Cloning a mammoth, or a passenger pigeon or an American chestnut tree, is impossible without intact DNA from living tissue. But by splicing degraded DNA from, say, a frozen Siberian mammoth carcass with living cells from an Asian elephant, and using the elephant as a surrogate mother, with careful gene editing and some luck, within two or three generations we might see a hybrid animal that is, for all intents and purposes, a living, breathing, hairy, cold-adapted, breedable mammoth fit to be released into Pleistocene Park. “The chances of success,” MacPhee writes, “are better than one might think.” From a scientist, this is optimism indeed!