Book Review: The Three-Minute Outdoorsman Returns: From Mammoth On The Menu To The Benefits Of Moose Drool 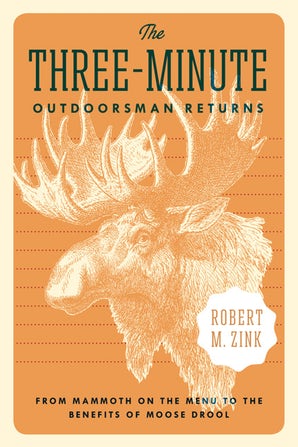 There are two Bob Zinks. One is Dr. Robert Zink, who once led the ornithology department at the University of Minnesota and now is on the faculty of the School of Natural Resources at the University of Nebraska-Lincoln. The other is his alter ego Bob Zink, aka the Three-Minute Outdoorsman, who changes from lecture clothes to camo for outdoor adventures and observations guided by an unbound curiosity.

Dr. Zink is author of many scientific papers. As Bob the outdoorsman he is author of articles in Minnesota’s sportsman tabloid, “Outdoor News,” articles collected first in a book entitled “The Three-minute Outdoorsman: Wild Science from Magnetic Deer to Mumbling Carp,” and more recently in “The Three-minute Outdoorsman Returns: From Mammoth on the Menu to the Benefits of Moose Drool.”

Bob is a man who feeds his curiosity with scientific research papers, probably one of few hunters who does that. Yes, he is a hunter, venison a favorite meat. The questions he has and the answers he finds are given to readers in stories generated by his time in the field, often with hunting bow in hand. The latest book has several essays about white-tailed deer. He explores questions about wild sheep, dirty kitchens, Passenger Pigeons, dogs, road kill, fish, catch-and-release, and water fleas, among many other things.

There are particularly pointed comments on the problems caused by feral cats and house cats allowed to roam outdoors. He wonders why the City of Minneapolis bends to the demands of the pro-cat lobby at the same time it favors bird-safe glass at U.S. Bank stadium. The cat lobbyists feed feral cat colonies. Feral cats kill far more birds than ever will die flying into stadium glass.

There is more and more, including another chapter on cats: “A Scientific Program Dedicated to Eradicating Feral Cats.” Cat fan or not, you’ll enjoy being outdoors with Bob. Meet a man who knows how to find a good answer to an interesting question.

Editor’s Note: The chapter “Never Let the Truth Get in the Way of a Good Story about Cecil” recalls the 2015 controversy about a lion in Zimbabwe killed by a Minnesota dentist, with Zink opining that, contrary to the views of many, “the hunter did nothing wrong.”