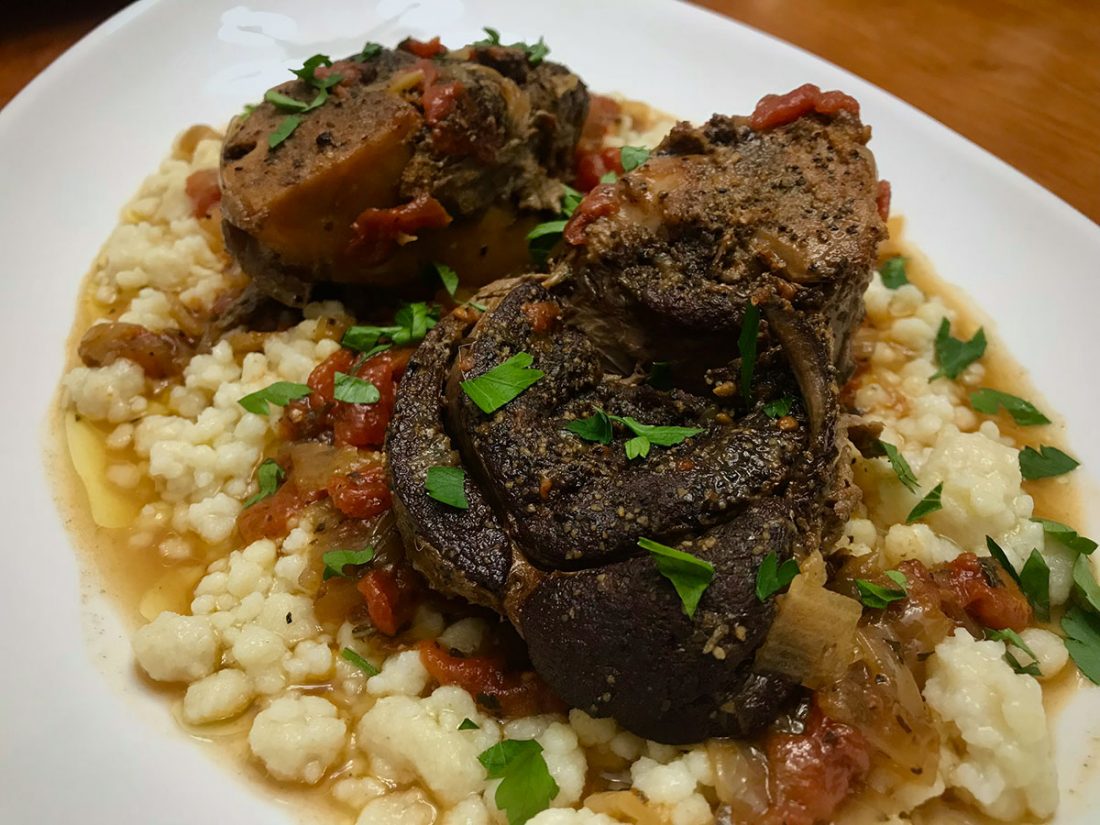 Rachel Owen and Wade Truong from Elevated Wild hunt, fish and forage in Virginia during the ebb and flow of seasons. This time, they describe how to turn sinewy shank meat into an amazingly tender and flavorful creation with distinct Italian roots, but applicable to game from wherever you are hunting.

In the life of a hunter, angler and forager, every month, every season, has its magical rhythm and movement.

April is waiting for the dogwood to bloom (Cornus florida, the flowering dogwood native to eastern North America and northern Mexico). The snowy-white blooms herald the arrival of the massive spawning migration of shad up the Rappahannock River. The shad, (Alosa sapidissima) are harbingers of spring- historically, their arrival broke the long, cold fast of winter and provided ample (but bony) food for early colonists, George Washington included. We wade out into the still cold, fast flowing water and land fish after fish, osprey wheeling overhead, participants in an ancient annual ebb and flow.

By late May, the weeds in the creeks that feed the mighty Potomac start growing, and fast. Snakehead season has begun. Channa argus, the Northern Snakehead, is a non-native fish species here that makes for explosive top water fishing and excellent eating. We’ll spend our summer sitting in tidal waters stilled by grass, the heavy humid silence punctuated by the occasional violent strike of a fish.

Come early fall, and as the fields and foliage start to take on their golden hue, we are busier than we’ve been all year practicing with our bows and sighting in guns. By October, while our neighbors are carving pumpkins, we’re carving up a deer in the backyard. The post-holiday depression in January never comes for us- we’re too busy watching for ducks in the grey marsh dawn.

And so, each meal that we put together from our wild bounty pulls from this annual ebb and flow. As one pursuit comes into focus, another fades. To be able to assemble a dish that brings them together is a real joy.

The shanks are cross-cut into what is called ossobuco (or osso buco—Italian for “bone with a hole”—from osso “bone” and buco “hole”, the latter a reference to the marrow hole at the center of the cross-cut shank). Ossobuco is a specialty of Northern Italy’s Lombard cuisine.

Shanks are great any way you cut them—pun intended! We cut ours with a Sawzall, or you can use an oscillating tool with a saw blade. You can do it by hand with a bone saw too. Whatever method you choose, make sure you thoroughly wipe down the meat before packing or cooking, otherwise you’ll find bone fragments on your plate later.

Frascatelli, a free-form homemade pasta, is incredibly easy to make. This typical pasta is an ancient peasant staple from the countryside of Lazio, Umbria and Marche in Italy. It gets its name from the word frasca, either a twig—typically laurel—used to sprinkle water onto the flour; or a three-pronged stick, used to mix the dough. The variety in size and shape of the pasta lends the final product an interesting texture. You don’t need any special equipment to pull it off, either. Just a bowl, some semolina, and a squeeze bottle.

Venison Ossobuco with Tomatoes and Frascatelli

Season shank with heavily with salt, wrap and refrigerate overnight. When ready to cook, rinse off excess salt, pat dry and season with black pepper.

In a large pan heated to medium high heat, add oil and brown both sides of the shank, for about 2 minutes on each side. Remove from pan, and set aside.

Adjust heat to medium, add in ¼ cup duck fat and onions. Cook until fragrant and tender, about 5 minutes. Add tomatoes and basil, stirring often, and allow to boil down to a loose paste, 5-8 minutes. Pour in white wine and reduce until liquid is just below the tomatoes and onions, about 5 minutes. (Note: if you don’t want to use the sous vide method, try braising: after reducing wine, add in the shanks and top off with stock, reduce to low simmer and cook for 4-6 hours until tender. Once tender remove shanks and reduce liquid to desired thickness before serving.)

Cook for 24 hours. When done, remove from bag and serve over frascatelli or other small pasta.

Pour 1 cup of semolina into a wide pan or bowl. Using a squeeze bottle, direct a very thin line of water onto the semolina in a tight zigzag pattern. The flour will clump up where the water hits it. Use a chopstick or the handle of a wooden spoon to break up the clumps of frascatelli. Use a slotted spoon to remove frascatelli from the semolina, or pour the whole thing through a coarse strainer (with a bowl underneath to catch and reserve the semolina). Repeat until you are out of dry semolina. Lay the pasta out on a dry cutting board or sheet pan while you work.

Boil heavily salted water and cook frascatelli until they float, 5-10 minutes, strain out and add a little olive oil to prevent sticking.

Wade Truong is a self-taught chef from Virginia, avid fisherman and late onset hunter; his partner Rachel Owen considers herself a Virginia native and says that she didn’t grow up outdoors, the outdoors grew on her. Both hunt, fish, and forage together with their black Lab Tater Tot. Wade and Rachel love cooking for friends, and exploring new ingredients and flavors. Explore all their recipes, adventures, and how-to guides at https://elevatedwild.com/, follow them on Facebook, Twitter @elevated_wild or Instagram https://www.instagram.com/elevatedwild/.