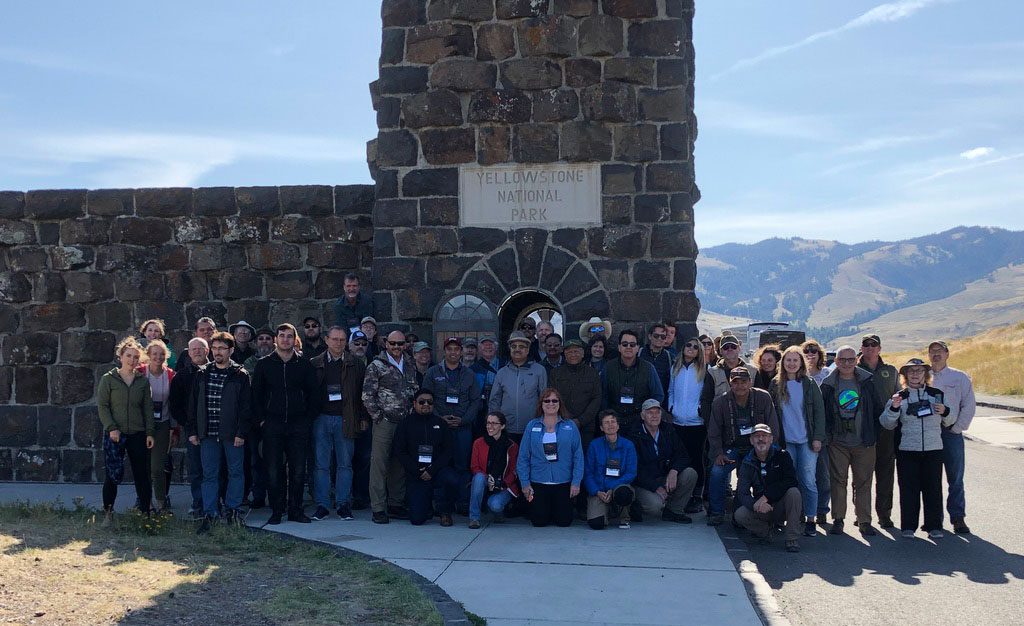 On September 10, 2019, much of the world’s wild sheep, wild goat and rupicaprin expertise could be found in Bozeman, Montana, at the three-day 7th WMUC, the World Mountain Ungulate Conference. This was the first time the WMUC has been held in North America. It was hosted by the Wild Sheep Foundation (headquartered in Bozeman), cosponsored by WSF and the Safari Club International Foundation, and endorsed by the IUCN Caprinae Specialist Group.

This was truly a worldwide conference, with 213 participants from 20 countries offering 51 oral presentations and 19 posters addressing research conducted in 24 countries. The research covered 23 species of wild sheep and wild goats, nine cervids, one antelope and three carnivores. Sessions were held on taxonomy, genetics, ecology and behavior.

In his opening address, Dr. Valerius Geist, Professor Emeritus of Environmental Science at the University of Calgary, Alberta, challenged wildlife managers and researchers to re-think the impacts of predation on ungulate populations. 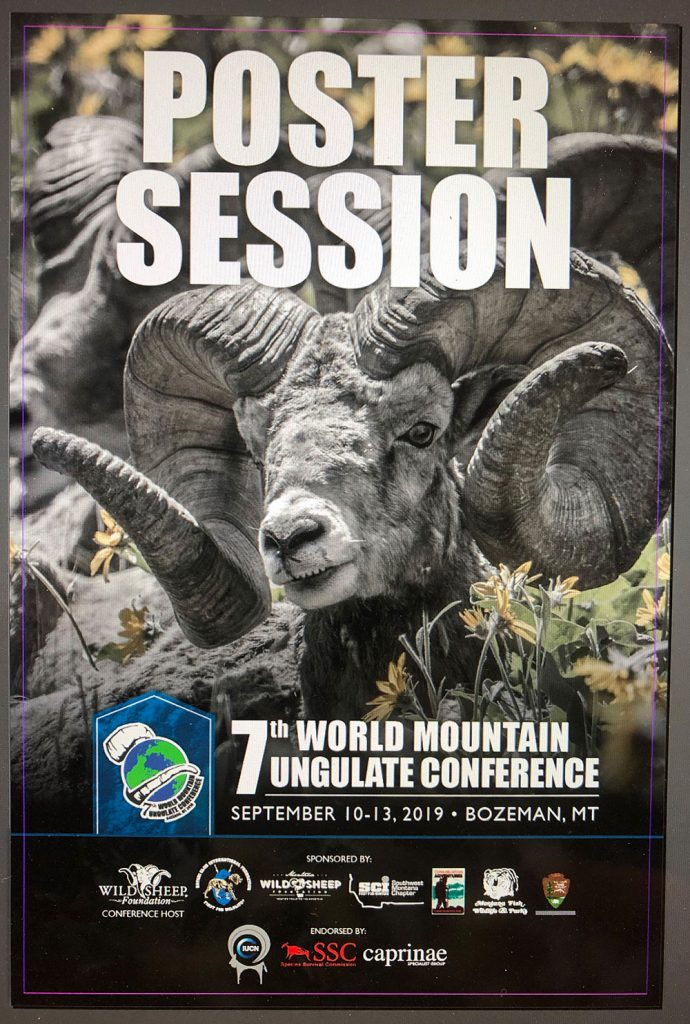 The second session provided a broad and diverse glimpse of individual variations in migratory ungulates, movement and use patterns, co-occurrence of multiple ungulates, weather and climate change implications, impacts from human visitation, nutrition and other variables within diverse geographic regions including the Yellowstone area, deserts of the US Southwest, Italy, Spain, the Russian Far East, Pakistan and Mexico.

From the University of Alberta and Université de Sherbrooke (Québec), Dr. Mark Boyce and Dr. Marco Festa-Bianchet, respectively, led Wednesday’s “Population and Harvest” session. This explored impacts of hunting, nutrition and population demographics on ecological and evolutionary changes in horn size. It also explored cougar predation on bighorn sheep, and restoration projects ranging from Rocky Mountain goats and bighorn sheep to Arabian tahr. The day ended with a special panel on the effects of harvest.

Dr. Vern Bleich, retired from California’s Dept. of Fish & Wildlife, led the “Habitat” session with a passionate call to elevate wildlife populations and wildlife conservation objectives to the same level of value accorded to other attributes of wilderness on US federal lands. Topics covered three continents and focused on impacts related to land-use designations, forage quality, weather and human disturbance, and cover attributes related to habitat.

Dr. Peregrine Wolff, DVM—Nevada’s State Wildlife Veterinarian and Wildlife Committee Co-chair of the US Animal Health Association—led the “Disease” session. She focused on the importance and relevance of disease research and monitoring on both wildlife and livestock. She presented the results of pathogen research in countries from Central Asia to Europe and North America. 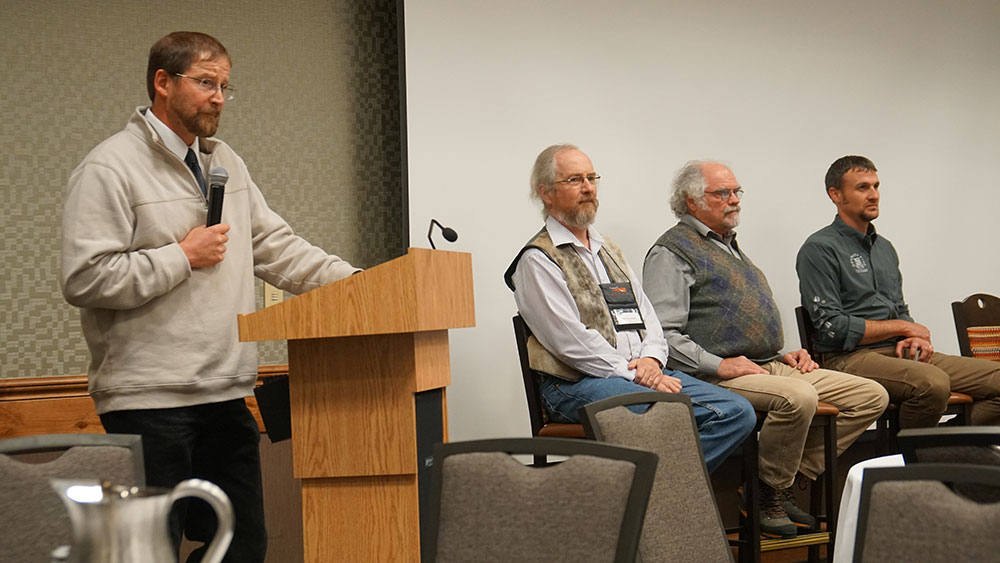 Panel discussions took place on Wednesday and Thursday. With Marco Festa-Bianchet, Mark Boyce, Kevin Monteith and moderator Quentin Kujala, Wednesday’s panel focused on the effects of harvest on bighorn sheep populations and on what management regimes can do to avoid the artificial evolution of smaller horns. Attendee interest kept the discussion going for nearly an hour beyond its scheduled time.

Moderated by Shane Mahoney, Thursday’s panel focused on the role of sustainable use in conservation. The panel included Manzoor Quireshi and Athar Khan, Pakistan; Orynbassar Shaimkhanbetov, Kazakhstan; Khalil Karimov (SULi Central Asia chair), Tajikistan; and Nicole Tatman, New Mexico. Discussion centered on messaging of the role of hunting in conservation, transparency in where and how funding is allocated to local communities for conservation, and hunting’s role in managing introduced/invasive species. Once again, the discussion exceeded its allotted hour due to attendee engagement.

Take-home messages and questions from the conference included:

We thank the Montana Wild Sheep Foundation, the Southwest Montana Chapter of Safari Club International and Map Brewing for sponsoring our evening poster presentations and receptions. We also want to thank Montana Fish, Wildlife & Parks and Yellowstone National Park for support and for helping to sponsor the field trip.

The scientific quality of this conference was reflected by the diversity and quality of scientific presentations and efforts by the conference chairs: Kurt Alt, Conservation Director, Montana and International Projects, Wild Sheep Foundation; Dr. Raul Valdez, New Mexico State University; Dr. Juan Herrero and Prof. Sandro Lovari, Co-chairs of the IUCN Caprinae Specialist Group. Diverse perspectives, sharing of information and the willingness of attendees to plunge into controversial subjects made the conference a success. WSF’s role in hosting and co-sponsoring this scientific event with SCIF has raised their joint conservation profile worldwide.

Kurt Alt has served as the Conservation Director, Montana and International Sheep & Goat Programs, for the Wild Sheep Foundation since 2015. Previously he worked for Montana Fish, Wildlife & Parks for 35 years as a wildlife biologist and Southwest Montana Wildlife Manager. He is also past President of the Northwest Section of the Wildlife Society. Kurt holds a BS and MS in Fish and Wildlife Management from Montana State University.

Marco Festa-Bianchet is a professor at the Département de Biologie Université de Sherbrooke/Canada. He has worked on large mammal ecology and conservation for 37 years and has published papers on seven species of mountain ungulates. He is an author or co-author of 216 scientific papers. He was for 16 years the Chair of the IUCN Caprinae Specialist Group and chaired COSEWIC for four years, at the time when the Aboriginal Traditional Knowledge Specialist Group was established. He was a Co-Chair of COSEWIC’s Terrestrial Mammals Specialist Group for 11 years. He has led long-term studies of bighorn sheep and mountain goats in Alberta. He has also worked on ibex and chamois in the Alps, caribou in Canada and kangaroos in Australia. His current research examines the evolutionary and population dynamics consequences of individual differences in wild large mammals monitored throughout their lives. Dr. Festa-Bianchet grew up in the mountains, speaks four languages and is interested in using ecological and evolutionary research to improve the sustainable use of mountain ungulates as a means to conserve intact mountain ecosystems.