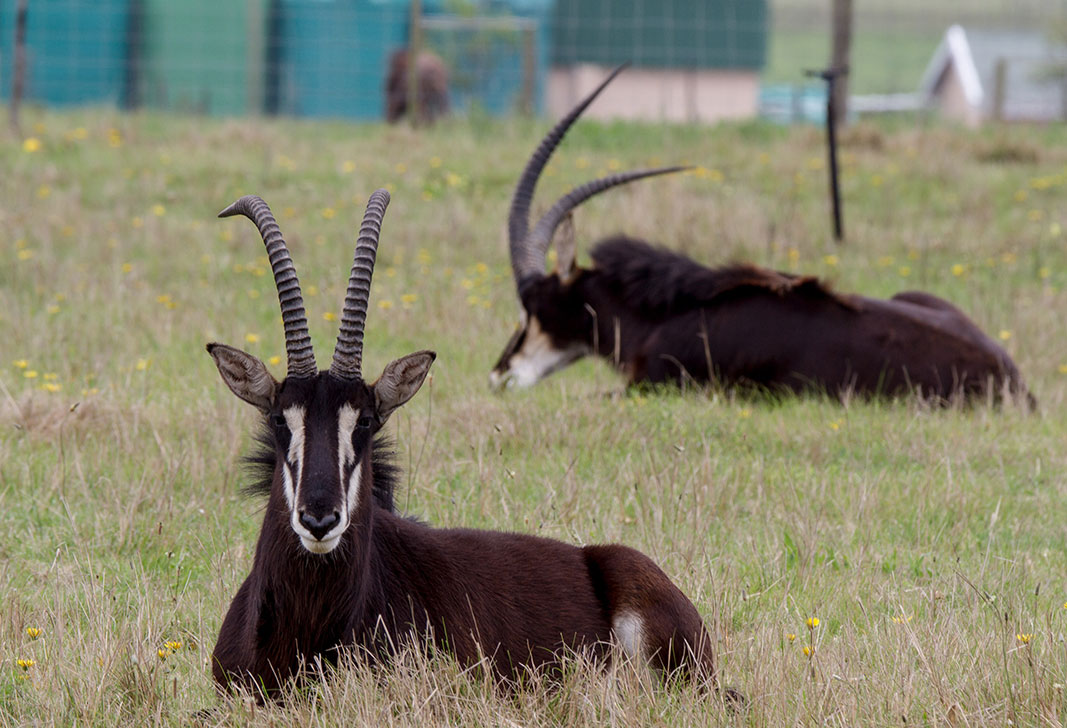 The amendment to South Africa’s Table 7 of the Animal Improvement Act 62 of 1998 places 33 wild species under the responsibility of the Department of Agriculture, Land Reform and Rural Development. This presents serious risks for conservation and questionable opportunities for a few.

“The purpose of the Animal Improvement Act 62 of 1998 is to provide for the breeding, identification and utilization of genetically superior animals in order to improve the production and performance of animals in the interest of the Republic [of South Africa].”

On May 17, 2019, South Africa’s Dept. of Agriculture, Forestry and Fisheries (now reorganized as the Dept. of Agriculture, Land Reform and Rural Development, DALRRD) published an Amendment to Table 7 of the Act by introducing 33 wild species, 26 of which are indigenous to Africa, and seven of which are found on private property in South Africa but are not indigenous African species. The wording of Act 62 does not make clear what is meant by improving the production and performance of the species listed, nor how this will be assessed “in the interest of the Republic.” The species concerned have the potential to be used for ecotourism, live sales, meat, milk and hide production, hunting for trophies and, in the case of white and black rhino, the harvesting of horn.

In any discussion of this amendment to the Act, consideration must be given to the vital importance of the economic, social and conservation value of the wildlife ranching industry and its potential to support the green economy in South Africa (Taylor, Lindsey, & Davies-Mostert, 2015). This key publication quantifies the extent and value of wildlife ranching in the country. The value of the species used by wildlife ranchers provides landowners with a more profitable land-use option than traditional livestock farming. However, the same ranchers should not be given carte-blanche to go ahead with breeding programs for the 33 listed species that could be a threat to their wild counterparts.

There is of course nothing new in wildlife auctions of species with large horns or other characteristic desired by hunters, and those individual animals can command premium prices. Several of the auction sites refer to the Rowland Ward Record Book, but it should be noted that Rowland Ward does not support genetic manipulation and in-line breeding, and does not accept entries of such trophies. In other words, the premium prices commanded at wildlife auctions are not prices paid by hunters, but prices paid by would-be breeders.

The popularity and prices of color variants such as the black impala escalated spectacularly in South Africa after 2000, but in 2019 these prices dropped just as dramatically. Although many of these variants are still offered on wildlife auctions, prices are unlikely to recover. Unfortunately, the majority of wildlife auctions still feature far too many of these undesirable genetic manipulations.

The introduction of 33 wildlife species into Act 62 will be the responsibility of DALRRD, which has no track record or experience of working with the species listed. This is a serious cause for concern. Section 21 of the Act deals with inspection of the management of the species listed; this appears to be totally unrealistic in the absence of a large, qualified and experienced team, which does not exist at present and which will cost hundreds of thousands of Rand to establish and run. 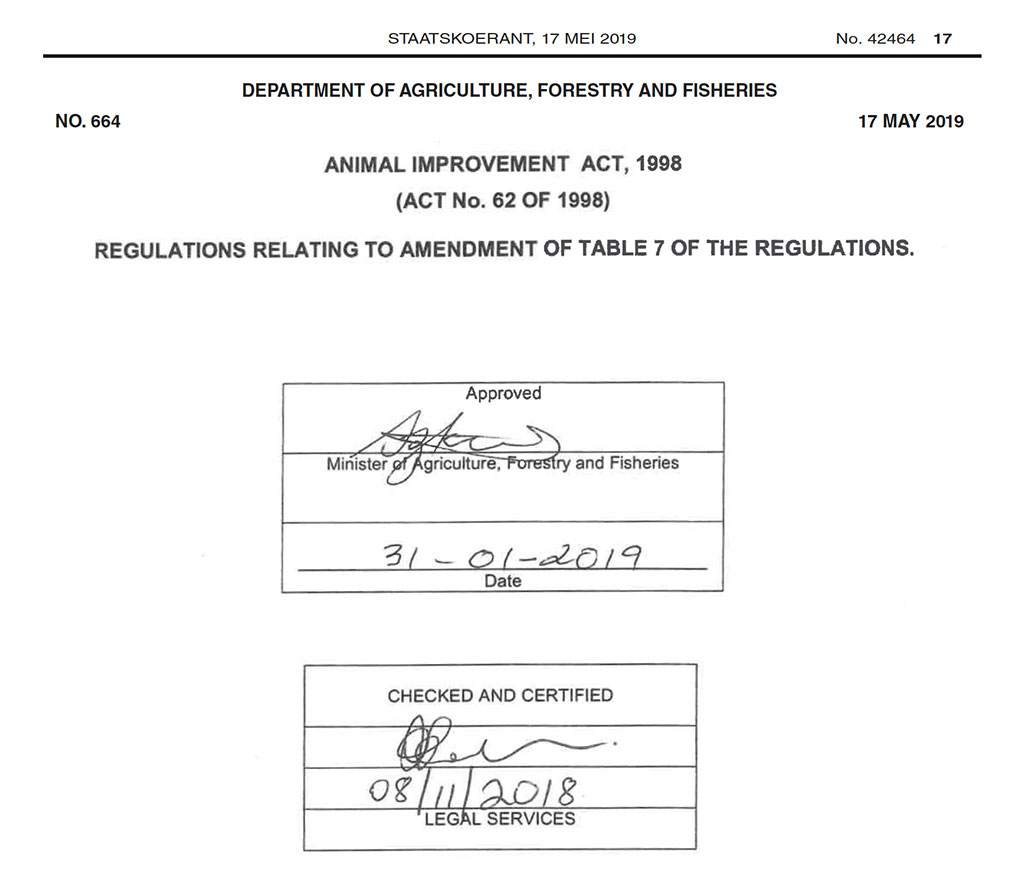 Snapshot of the header of the Animal Improvement Act 62 of 1998, signed by the Minister of Agriculture, Forestry and Fisheries on January 31, 2019, and published in the Government Gazette on May 17, 2019.

Selective breeding to “improve” any usage suggests a process of domestication1 and, although there is no reference to domestication or to the production of new domestic animals in the Amendment to Table 7 or in the original Act itself, there is no doubt that many of the species listed have already been “domesticated.” Their behavior, feeding habits and genetics have already been significantly modified to change them from their original wild relatives to a life in captivity, meeting a number of human requirements.

The strict management of these species, to prevent them escaping or even being deliberately released into designated protected areas, should not be the remit of DALRRD but of the Dept. of Environment, Forestry and Fisheries, working closely with national and provincial conservation authorities.

Safeguarding the genetic integrity of the wild species living in increasingly smaller and isolated areas should be a national priority for South Africa, but there is no mention of this issue in the Act. Countries neighboring South Africa are also at risk from the deliberate or accidental release of genetically modified species.

The spread of diseases between wildlife species and domestic stock is not addressed in the Act. There are only two references to the role of a veterinarian, both only in connection with the suitability of each species for semen and embryo collection. This is an extremely serious omission. The international community as a whole must consider prevention and control of wildlife diseases as crucial components of safeguarding global animal and public health as well as biodiversity, while dealing with related agriculture and trade issues.

In conclusion, this realignment of the management of the species listed was almost certainly stimulated by the frustration of the game-ranching industry at what was perceived as unnecessarily restrictive control by South African conservation authorities on breeding and movement of wildlife species on private land.

The revised Act (with control passing to agricultural authorities) should be firmly rejected by national and provincial conservation agencies in South Africa. This impasse is unlikely to be resolved in the absence of further attempts to open a constructive dialogue between wildlife ranchers (which addresses their financial and logistical concerns) and conservation authorities who have an international obligation to protect the genetic integrity and health of wildlife populations.

Taylor, W.A., Lindsey, P.A. & Davies-Mostert, H. (2015). An assessment of the economic, social and conservation value of the wildlife ranching industry and its potential to support the green economy in South Africa. The Endangered Wildlife Trust, Johannesburg.

John Hanks is a zoologist. His first degree in Natural Sciences, from Magdalene College, Cambridge, was followed by a PhD on the reproductive physiology, growth and population dynamics of the African elephant in the Luangwa Valley, Zambia. He has more than 45 years of experience in a wide variety of conservation management and research projects. John has worked in several African countries, including Angola, Botswana, Ethiopia, Kenya, Mozambique, South Africa, Zambia and Zimbabwe. His most important postings have been: Chief Professional Officer for the Natal Parks Board; Professor and Head of the Dept. of Biological Sciences, then the first Director of the Institute of Natural Resources at the University of Natal; Director of the Africa Program for WWF International (based in Gland, Switzerland); Chief Executive of WWF-South Africa; and first Executive Director of the Peace Parks Foundation. He has published more than 150 scientific papers.