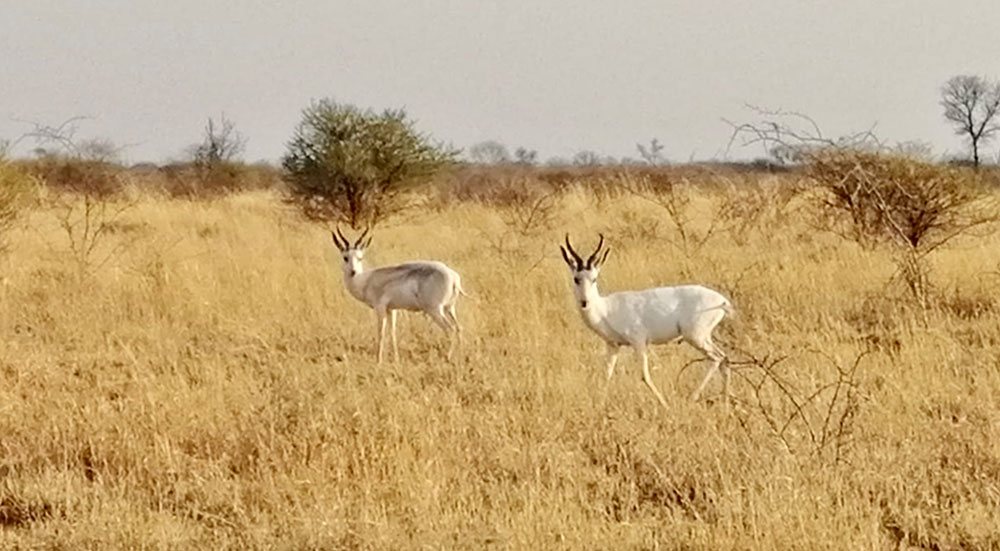 ‘A Springbok which is White, People Do Not Kill It’ – Contrasting attitudes of colonizer and colonized towards mammal anomalies

South Africa’s indigenous /Xam people entertained superstitions surrounding the white springbok they encountered periodically, which were in sharp contrast to those of the colonizing European settlers.

Springbok and other animals occasionally produce white individuals. Although these animals are sometimes true albinos, for the most part they are more correctly referred to as leucistic, a condition of paleness that results from a recessive gene1. Such anomalies of course draw attention and even today such individuals of various species are acclaimed2 and even selectively bred. This attention to anomaly is no different from the past and the differing attitudes of the colonizers and the colonized towards white springbok perhaps best place the attitudes of the /Xam  [San] towards nature in context.

European colonizers, for example, most often viewed white springbok as een groote rariteit3 [a great rarity] and immediately upon discovery sought either to capture and display the creature at centres such as Kimberley4 or Johannesburg, or to kill it and present the skin to the nearest museum5. Whether or not either course was followed, the discovery of a white springbok or the procurement of its skin was always reported with some pride and excitement6. This is not to say there was only academic or commercial interest bestowed on springbok by the white community.

On the contrary, white springbok also evoked considerable superstition in some communities. In Beaufort West in the mid-19th Century, for example, a white springbok which moved between this district and that of Prince Albert was continually harassed by all the local hunters, who believed that shooting the animal would ensure the success of all future hunting efforts. The fact that the animal survived for two years despite this unwelcome attention only served to fuel the belief. Several decades later, a white springbok in the western Orange Free State survived “thousands of cartridges” over a similar period of time before eventually succumbing to hunters’ bullets, this animal being the subject of a local myth that held it was “a phantom-shape assumed by the evil spirit himself to delude people from the chase of other game.”

In contrast to these attitudes, the /Xam held a completely different belief with regard to white springbok. The following well-known extract from one of /Han…kass’o’s narrations encapsulates this attitude:

In other words, while the /Xam also entertained superstitions surrounding the unusual white springbok which they would have encountered periodically, these are in sharp contrast to those of their white counterparts. Instead of seeking to shoot white springbok to increase hunting prowess and success, the /Xam fastidiously avoided such practices in order to avoid chasing the springbok herds from their lands. The reliance of the /Xam on springbok was profound, and a core difference between the two cultures of course was the contrast [between] subsistence hunting and sport hunting8. In another of /Han…kasso’s narrations, he makes it clear that the presence of the white springbok, which the /Xam called !Guara-!Guara, was valued because it was associated with large herds of springbok and the ensuing abundance of protein:

This general attitude prevailed even among those Khoi who had been co-opted as goatherds in the Graaff-Reinet district in the early part of the 20th Century, further indicating the extent of the difference between colonizer and colonized:

An instance has recently occurred at Shirlands, where the presence of a white springbuck has become the centre of a veritable romance. The goat herds declare that a miraculous halo surrounds the animal, she is the ‘Queen of the Bucks’ and has been endowed with perpetual youth. If a dozen bullets pierced her body, she would rise phoenix-like from the bushes, with wound healed and with a double measure of vitality. Consequently, when their ‘baas’ (Mr. John E. Hobson) announced his intention of calling a few friends together in order to hunt the animal and secure the skin and horns for the Port Elizabeth Museum, his swarthy retainer started aghast, and prophesied dire disaster! …. Mr Hobson shot the animal with no consequences … skin can now be inspected at the Direct Supply Store in Graaff Reinet.

The value in understanding this dichotomy is the added emphasis it places on the differing dependence and relationship with nature held by /Xam hunter-gatherers and European agri-pastoralists. The /Xam ethnography is not limited to this aspect of environmental history, however, and a close reading thereof can play a significant role in the understanding of long extinct natural phenomena such as springbok treks.

An extract from ‘The Springbok … Drink the Rain’s Blood’: Indigenous Knowledge and Its Use in Environmental History—The Case of the /Xam and an Understanding of Springbok Treks published in the South African Historical Journal, 53 January 2005, 1-22.