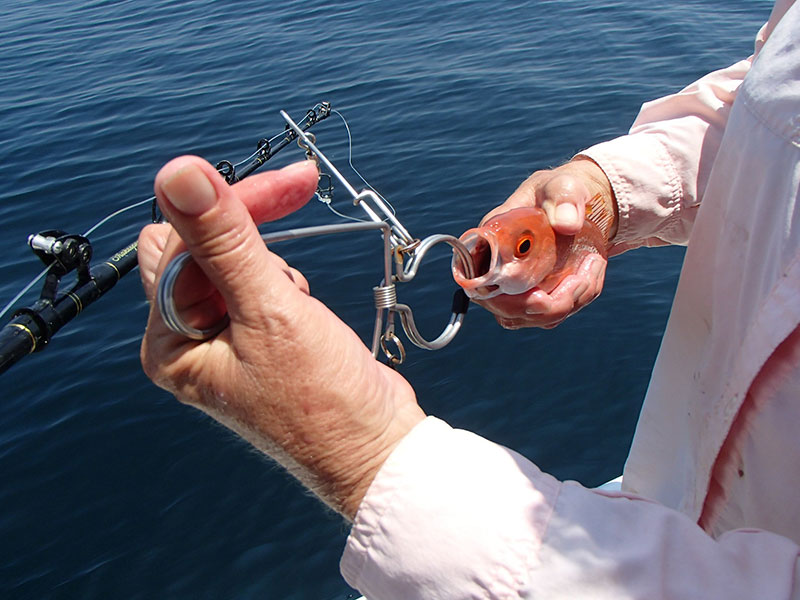 Sending Them Safely Down to be Caught another Day

The sustainability of catch-and-release fishing for deepwater species depends on so-called descending devices—and on anglers’ willingness to learn to use them.

Native to the South Atlantic and Gulf of Mexico, red snappers are prized gamefish in the US. Easily caught on both natural bait and artificial lures, their hard-fighting nature and excellent eating qualities make them highly sought-after. But this comes with a downside. Red snappers are often caught out of season, incidentally, when anglers are targeting other species; and if caught in relatively deep water, like other reef fish, they can have difficulty swimming back down to their original depth and often die at the surface after release due to a condition known as barotrauma. High release mortality can have far-reaching impacts on both fishing seasons and the overall population of deepwater species.

Most fish have swim bladders. When a fish swims up or down the water column, the volume of gas in the swim bladder decreases or increases to maintain neutral buoyancy. Reef fish such as red snapper, gray triggerfish, vermillion snapper, gag grouper and many others are often caught near the bottom. When the bottom is more than 100 feet down, barotrauma can occur when the fish is rapidly brought to the surface.

Barotrauma is caused by pressure differences in the water column. At sea level, the air around us presses on our bodies at 14.5 pounds per square inch. This is defined as 1 atmosphere (or 1,000 millibars). For every 33 feet in depth, water pressure increases by another 14.5 psi, or one additional atmosphere. At 100 feet of depth, the pressure of the water is 3 atmospheres—three times greater than atmospheric pressure at the surface. 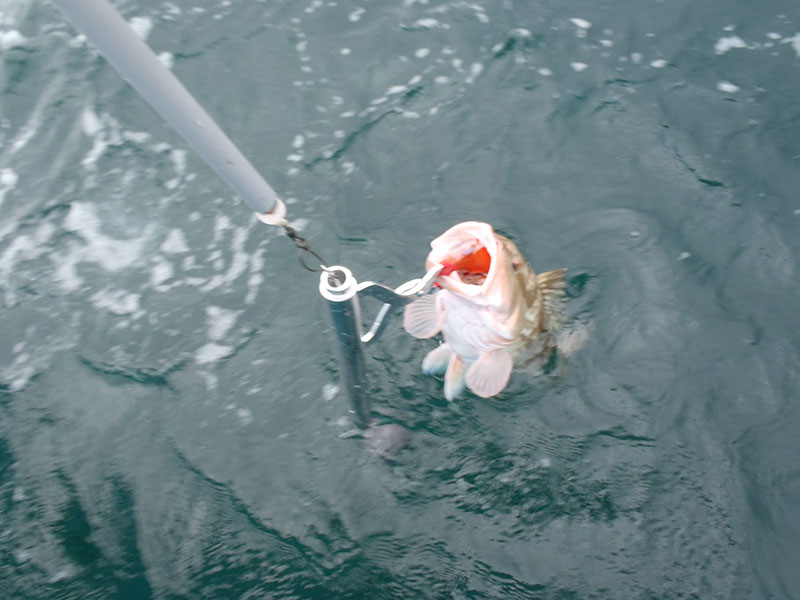 When a fish is brought to the surface, the decreasing pressure of the water allows the gases in its body to expand. If this happens more rapidly than the swim bladder can compensate, it puts pressure on the fish’s internal organs and increases the fish’s buoyancy. If the fish is released, this extra buoyancy makes it difficult if not impossible for the fish to swim back down to its original depth, where its internal gases (and organs) would return to equilibrium with the pressure of the surrounding water. The resulting barotrauma is often fatal.

Anglers can help deepwater fish safely return home with so-called descending devices. These can be anything from a special implement (such as the SeaQualizer)—it grips the fish’s lips and then pops open to release the fish at a pre-set depth—to a weighted milk crate or cage that is placed over the fish and then lowered to the depth at which the fish was caught, where the fish then swims out on its own, its internal gases re-stabilized.

Weight is an important component of any descending device, as it must overcome the buoyancy of the fish and return it to depth. Mechanical descenders generally have to be pre-rigged on a dedicated rod and reel, while cage-type devices must be on a line that will reach down to the fishing depth. In either case, it is imperative that the device be ready because minimal surface time is essential for released deepwater fish to survive. 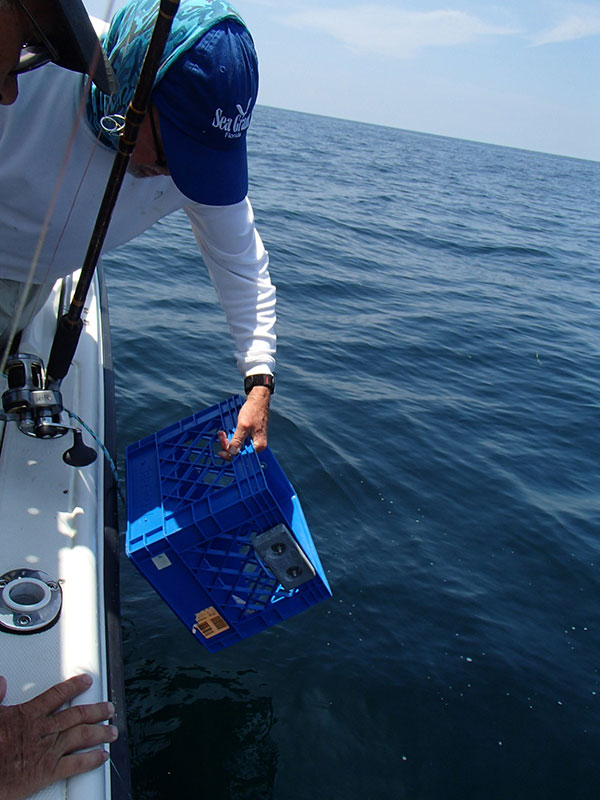 Venting tools are another option for the safe release of deepwater fish. A venting tool is a sharp-pointed hollow instrument such as a relatively large hypodermic syringe with the plunger removed. Venting tools puncture the abdomen wall of the fish (and its swim bladder, if it’s not already ruptured) to let gases escape. (A knife or icepick or other solid tool is not a venting device and will cause additional damage.) While descending devices are preferred, especially for anglers not experienced with venting techniques, research has shown that the correct use of a venting tool can increase a fish’s chance of survival when caught from depth, especially for larger fish.

The University of Florida has some excellent resources and information on barotrauma in fish and on descending devices, venting tools and the techniques for each. Whatever the method, it is important to understand how to use it properly and to have the tools nearby and ready to use as soon as the fish is unhooked. A descending device or venting tool takes a few minutes out of the fishing day, but we have the responsibility as conservationists to make sure the fish we release actually survive in order to contribute to the sustainability of their population.

In addition to being a good practice in general, reducing the number of fish that die post-release also helps in fisheries management and provides additional access to some of our more heavily regulated species.

Descending devices will likely help improve angler success in the red snapper fishery on the South Atlantic coast of the US. While catch rates of red snapper have steadily increased there in recent years as the population rebuilds, each year we see fewer days in the red snapper harvest season. The National Marine Fisheries Service’s preliminary estimate this spring indicated the 2020 South Atlantic red snapper season could be as short as three days. This is largely because of the significant number of incidentally caught red snapper that die when released at the surface.

Strongly supported by the recreational angling community, the South Atlantic Fish Management Council recently passed Amendment 29 to the Snapper Grouper Fishery Management Plan in the South Atlantic. As of July 15, this requires anyone fishing for snapper or grouper there to have descending devices on board and ready to use. Ultimately, however, the success of descending devices—and any increases in fishing opportunities for red snapper and similar species—will depend on the willingness of anglers and commercial fishermen to use them.

As the popularity of saltwater fishing continues to grow, and as modern technologies increase our effectiveness at catching fish, we need to do all we can to ensure the long-term health of our marine resources. Responsible recreational anglers should be willing to ensure that their released fish survives so that we may be accountable to both conservation and the role we play as recreational anglers in fisheries management. Let us all do our part so that we may continue to enjoy healthy, abundant fisheries today, tomorrow and well into the future.

Chris Horton is the Senior Director of fisheries policy for the Congressional Sportsmen’s Foundation.