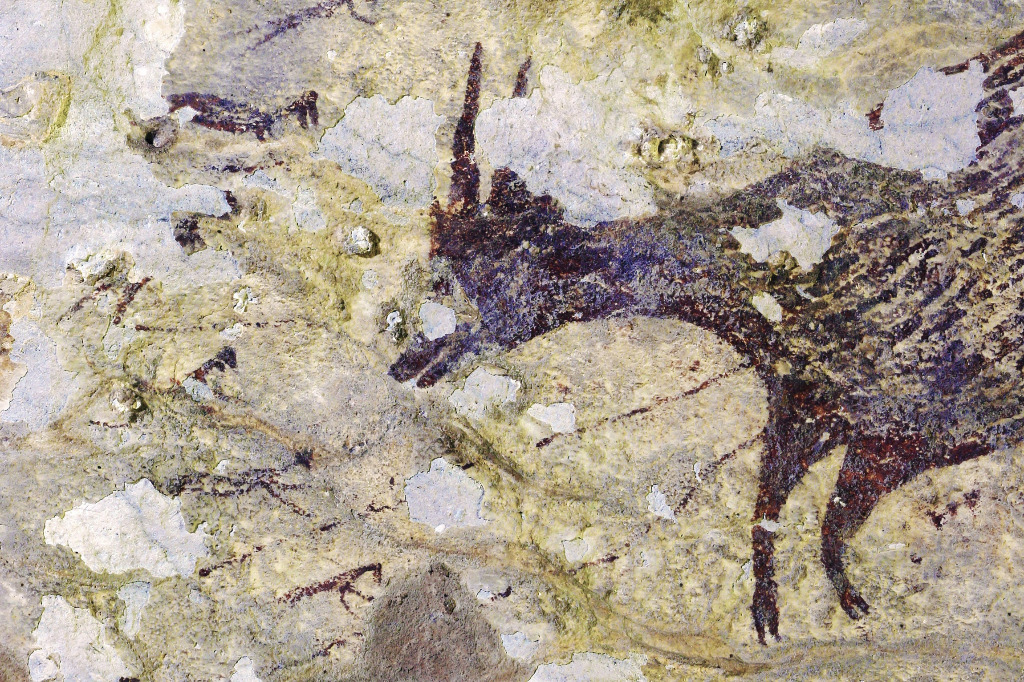 The Oldest Story Ever Recorded is a Hunting Narrative

Some 44,000 years ago, people on the Indonesian island of Sulawesi painted a hunting scene on cave walls. This is the oldest known recorded human story, and it may offer a glimpse into the origins of spiritual belief.

Archaeologist Maxime Aubert, from Griffith University in South East Queensland, Australia, and colleagues published, on December 11, 2019, in Nature their discovery of the world’s earliest-known figurative artwork, the pictorial record of a hunt. They also tell their story and show amazing footage on YouTube.

Made by prehistoric people on the island of Sulawesi, Indonesia, the painting is about 4.5 metres (15 feet) long and is situated some three metres (10 feet) above the floor of a hard-to-reach upper chamber of a limestone cave called Leang Bulu’ Sipong 4. This elaborate, 43,900-year-old rock-art panel—about twice as old most similar cave-art scenes in Europe—portrays human figures hunting what appear to be pigs and dwarf buffalo.

On the panel, several animals face off against a group of strangely tiny hunters in monochrome dark red. In the same pigment, a handprint is stencilled on the left end of the mural—likely a signature. The scene suggests a classic game drive, in which people flush two pigs and four buffalo from cover and drive them toward a trap or a line of hunters holding long spindly objects that might be ropes or spears.

Many of the hunters have elongated faces that resemble animal snouts. One hunter has a stubby tail and another appears to have a bird-like beak. These figures could represent humans clad in skins or masks, or therianthropes, representations of people with animal features—heads or other body parts.

The island is the home of two wild pig species, the Sulawesi warty pig (Sus celebensis) and the babirusa (Babyrousa babyrousa), and two wild dwarf cattle, the lowland and mountain anoa (Bubalus depressicornis and quarlesi). The shoulder height of both anoa is less than 100 centimetres (40 inches); both wild pig species on Sulawesi stand less than 80 centimetres (31 inches) high. Yet this mural depicts animals of monstrous proportions, many times larger than the hunters.

The long-ago artist may simply have recorded how his or her people made their living. Alternatively, this could show a scene from a legend or a vision, or it might convey a spiritual connection between humans and animals, perhaps by retelling a unique origin story.

Since the researchers found no other trace of human life—no tools, discarded bones or evidence of cooking fires—anywhere in the cave, one conclusion could be that this was a sacred or spiritual place for the prehistoric people of Sulawesi. Thus the mural might hold some mythological quality. The people who created it clearly had the cognitive ability to develop myths—the capacity to think and talk about things that don’t exist in the natural world—and therefore perhaps shamanic beliefs.

Galapagos Tortoise still show original migrating behavior. Dominant male tortoises wander up to 10 kilometers into the highlands of the island (young animals stay year-round in the lowlands). The reason for this, and the question of why they don’t rest during the dry season are not known. Read more about it in our Dispatch 👉🏼 https://bit.ly/3jSAHju #ConservationFirst #Wildlife #Tortoise ... See MoreSee Less

England’s deer population has exploded. Rising roe and red deer numbers cause tens of thousands of traffic accidents, and heavy crop and woodland damage. There may be a need for culling as many as a million deer—but not all agree on this. Read more about it in our Dispatch 👉🏼https://bit.ly/3jSAHju#ConservationFirst #Wildlife #Deer ... See MoreSee Less

In South Africa “taxi hunts with dogs” are often organized by criminal syndicates. The poachers arrive in minibus taxis at farms, and wealthy gamblers bet on the outcome of the dogs’ chasing wild animals, in particular oribi. Because many commercial farmers are White, and the illegal dog chases are predominantly conducted by Blacks, this betting-fueled poaching exacerbates social and political tensions. Read more about it in our Dispatch 👉🏼 https://bit.ly/3jSAHju #ConservationFirst #Wildlife ... See MoreSee Less

Javan rhino calves have been sighted in Java/Indonesia. Camera traps in Ujung Kulon National Park captured images of two calves, a female and a male, of this critically endangered rhino. Read more about it in our Dispatch 👉🏼 https://bit.ly/3jSAHju #ConservationFirst #Wildlife #Rhino ... See MoreSee Less

One species is being removed to save another. There is owl-to-owl conflict in the Pacific Northwest and the challenge to conserve endangered northern spotted owls as the range of more aggressive barred owls expands. Lethal removal of barred owls to benefit northern spotted owls illustrates the ethical complexities of wildlife management. Read more about it in our Dispatch 👉🏼 https://bit.ly/3jSAHju #ConservationFirst #Wildlife #Owls ... See MoreSee Less

Researchers have discovered a secret population of spectacled bears in a remnant, endangered forest in the highlands of Bolivia. The forest is one of the last surviving patches of the highly imperilled inter-Andean dry forest. While the spectacled bear population is small and has many threats, researchers say they hope to connect it with other populations. Read more in our Dispatch 👉🏼 https://bit.ly/3mcYyw6 #ConservationFirst #Wildlife #Bears ... See MoreSee Less

Conservation is expensive, so who pays for wildlife and land management in the United States? Since the creation of wildlife management agencies, hunters have been among the most important contributors. In addition to legally required hunting license fees, consider these two BILLION dollar examples:-The Pittman-Robertson Act is a tax on certain archery, firearms, ammunition, and other outdoor products that is dedicated to fund conservation programs and has generated more than $12.2 billion.-The Federal Duck Stamp is a $25 fee to legally hunt migratory birds such as ducks and geese which has generated over $1 billion.Both funding streams are essential for wildlife restoration and show the great conservation contribution of American hunters. ... See MoreSee Less

The endangered slender-horned gazelle occurs presently in the wild in Algeria and Tunisia, with some remnants in the Western Desert of Egypt and Libya. Main threats are excessive illegal hunting by locals, oil workers, and VIP hunting groups from the Gulf region; habitat degradation; population fragmentation; and climate change. The slender-horned gazelle conservation strategy provides a framework to guide actions needed to conserve and restore populations. Read more in our Dispatch 👉🏼 https://bit.ly/3mcYyw6 #ConservationFirst #Wildlife #Gazelle ... See MoreSee Less

Griffon vultures were considered extinct in the Eastern Balkan Mountains of Bulgaria in the 1970s. Now, a long-term restoration program has brought them back. 23-25 breeding pairs are distributed over five different colonies. Read more in our Dispatch 👉🏼 https://bit.ly/3mcYyw6 #ConservationFirst #Wildlife #Vultures ... See MoreSee Less

The Southern Bald Ibis Species Champion Project of BirdLife South Africa includes the monitoring of breeding colonies, an awareness program at schools within the bird’s core range, and the artificia...
View on Facebook
· Share

No, it’s not a species-by-species rundown of endangered animals—the beloved beasts that (some) humans are fighting to save. Instead, the book is about the humans themselves, the heroes of conservation who are behind the saving, and what they accomplished. Read our book review on Beloved Beasts: Fighting for Life in an Age of Extinction.#ConservationFirst #Wildlife ... See MoreSee Less

Book Review: Beloved Beasts—Fighting for Life in an Age of Extinction - Conservation Frontlines