Botswana’s Okavango Delta is becoming quite “crowded,” what with luxury camps springing up all over, and the natural tendency there is to provide much more than anyone really needs in a camp setting. Each month in season, trucks and boats trundle down the bush tracks and waterways, collecting loads of rubbish from those lodges and removing them to Maun. The carbon footprint is becoming greater with each passing year. I became interested in trying to reduce this impact to a more sustainable level and, naturally, recycling came to mind.

The town of Maun is the gateway to the delta, but a visit to our dump is not among Botswana’s great experiences. The lodges separate all their rubbish—the plastics, glass, cans, etc.—but once at the dump everything just gets lumped together again. However, to aid recycling, since about 2014 all SADC (Southern African Development Community) countries’ beverage cans have been 100% aluminum, so starting there was an easy decision. 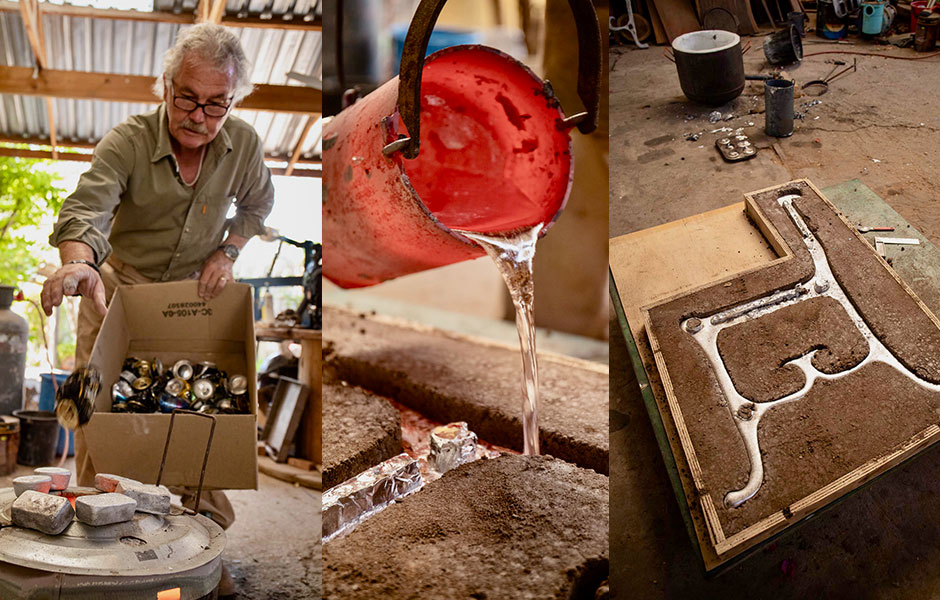 From empties to molten aluminum to a cast bench frame. Author’s photos

YouTube is a wonderful place to pick up new knowledge, and soon I was melting these cast-off cans in a homemade propane-fired  furnace. I had no idea what to do with the molten product, but my thought was at least to reduce the volume of rubbish and thus the number of trips trucks have to make to haul it all away.

Then the annual Okavango flood came, but so did COVID-19. The traditional daily trips up the dry riverbed to check on the approaching floodwaters were banned, but permission was granted for a few people to report daily on this epic annual event. We have a competition each year to predict when the water will arrive at the old Maun bridge. This year, every entry or 15-minute time slot cost 20 Pula (about $1.75), the funds going to two local charities.

I decided to use the aluminum to sand-cast large salad spoons, inscribe the date and time of the water’s arrival on them and sell them, this income also going to local charities.

Wow, little did I realize. I cast and sold 52 sets of spoons, each spoon taking the metal of 18 to 20 beverage cans. But the lodges in the delta churn out massive quantities of empties, so I added garden hose stands to my product line. This greatly increased the consumption of empties, but it was still not enough. I needed new ideas.

In October last year, while walking along the road in a small village in Italy, I had seen a traditional cast-iron bench. Could the iron be replaced with cast aluminum? It could—and that was just the idea I needed.

With some modifications, I quickly learned (YouTube again) how to sand-cast frames and assemble such benches. The two frames of each bench gobble up some 1,800 aluminum cans, the equivalent of 75 cases of soft or not-so-soft drinks. Now the Maun Waste Warriors are collecting cans from restaurants in town for this awesome initiative.

Ron Crous with a finished sand-cast frame; details of a bench. Author’s photos

Each bench is a two-seater about 1.2 metres (47”) wide. The seats and backrests are wood—recycled leadwood, mopane and knobthorn trees that Botswana’s burgeoning elephant population has knocked down. (Timber from the delta greatly enhances the looks of these benches and provides an Italian-African flair.) When hunting closed in Botswana, some years ago, I got involved in a small sawmill in Maun, so cutting and working these beautiful hardwoods was not a problem.

Right now, most of the income from bench sales is going toward drilling and setting up a borehole to provide year-round fresh water for the Polokong daycare center for elderly Batswana. Our target is 30,000 Pula, about $2,600. We sell a bench for 1,200 Pula ($103), of which 800 Pula ($69) goes to the water project. The benches are beautiful additions to home or garden, and they help reduce the enormous quantity of empty tins while providing safe drinking water for the daycare center. We call this a win-win.

Ron Crous was born in South Africa in 1959. His entire career has revolved around wildlife, as an extension officer for Cape Nature and Environmental Conservation, a game ranger in Namibia’s Etosha National Park, a lodge manager for photographic safaris and a professional hunter specializing in dangerous game.