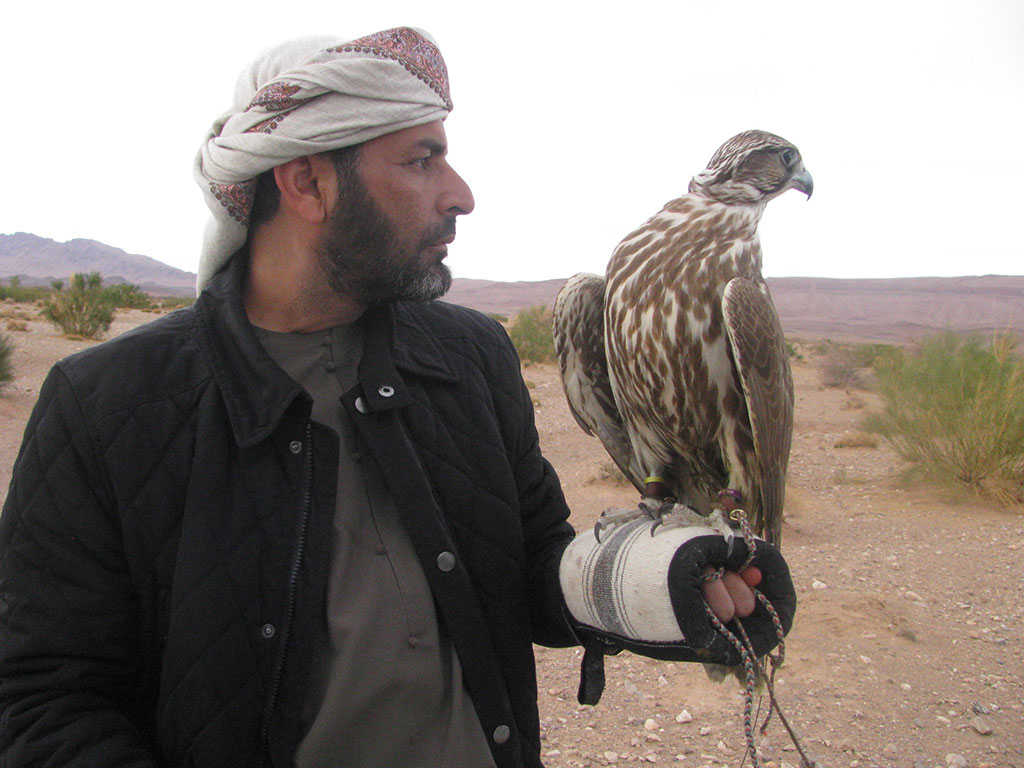 January 1, 2019 In January 2019 - Volume I-1, Regional News By Adrian Lombard, President, International Association for Falconry and Conservation of Birds of Prey.

Sustainable Conservation of the Saker Falcon

By Adrian Lombard, President, International Association for Falconry and Conservation of Birds of Prey.

The Bedouin falconry tradition probably extends back over thousands of years and is based around the annual migration seasons of the Saker falcon and its prey.  Sakers migrate south in winter, to the Arab Peninsula, along with Houbara Bustards and Stone Curlew. The Bedouins learned to trap the Sakers, train them rapidly, and hunt bustards and curlew.  As the warmer weather of spring heralded the northward migration, the trained Sakers were released back into the wild. This entirely sustainable custom was practiced from time immemorial.

At the turn of the 21st Century, some populations of Saker falcons were noted to be declining.  The decline coincided with an increase in the popularity of falconry as a cultural heritage in the Gulf region, and was initially associated with measurably increasing legal and illegal trade in Sakers.

As a reaction, the United Arab Emirates decided to cease using wild-taken Saker falcons and to opt for captive-bred birds; this resulted that at least 95% of falconry birds used in the Emirates are captive-bred. The Emirate of Abu Dhabi led the response to investigate the cause for the decline and efforts to restore the iconic Saker falcon.  As the availability of nest-sites is the limiting factor to Sakers breeding in the Eurasian steppes, the Emirate of Abu Dhabi developed a project to create 5,000 artificial nest boxes in Mongolia. In the process, it was noted that huge numbers of Saker falcons, and other raptors, were electrocuted on medium voltage electricity distribution lines that snaked across the endless rolling steppe. The poles of these lines provided the only elevated perching points for birds of prey; poor pole design made them perfect raptor killing machines.

Research was undertaken to establish the magnitude of this decimation and the results were horrific; approximately 10,000 raptors, of which 4,000 are Saker falcons, are electrocuted annually in Mongolia alone.  This can be extrapolated across the immense Saker distribution range, which extends from Hungary in the west, to China in the East, and from Siberia to East Africa. The electrocution is selective of larger birds, so more female Sakers than males are killed.  Clearly such losses are unsustainable.

Additionally, the collapse of the Soviet Union led to the disappearance of the huge collective grain farms.  The resulting habitat change caused a decline in the numbers of rodents used by Sakers to feed their chicks.  Other raptors were also affected, but their declines have largely gone unnoticed, although the Steppe eagle was recently reclassified in the IUCN Red List from Least Concern to Endangered.

In 2011, the Convention on Migratory Species (CMS) faced a call to up-list the Saker falcon from Appendix II to Appendix I, citing unsustainable illegal trafficking as the cause.  This position was by challenged by IAF, FACE and CIC and lead to the recognition of electrocution as principle cause for the decline; habitat change and illegal trade were considered other contributing factors.  The value of the artificial nest project in Mongolia was recognized, and this population was retained in Appendix II, allowing to a limited sustainable harvest. Following this agreement, the Saker Task Force was established under the CMS Raptors MoU.  The task force developed the Global Action Plan for the Saker Falcon, which incorporates the principle of sustainable use into the conservation plan. The plan was accepted by the CMS CoP in 2014.

The establishment of the 5,000 artificial nests in Mongolia resulted in over 500 of these being occupied by breeding Saker falcons by 2014. About 2,500 young birds are now produced annually.  Since the Saker is a particularly fecund species, a 10% harvest of young birds is completely sustainable. Political change in Mongolia resulted in a moratorium on the export of Saker falcons, however, and there is ongoing controversy relating to issues of governance and transparency. 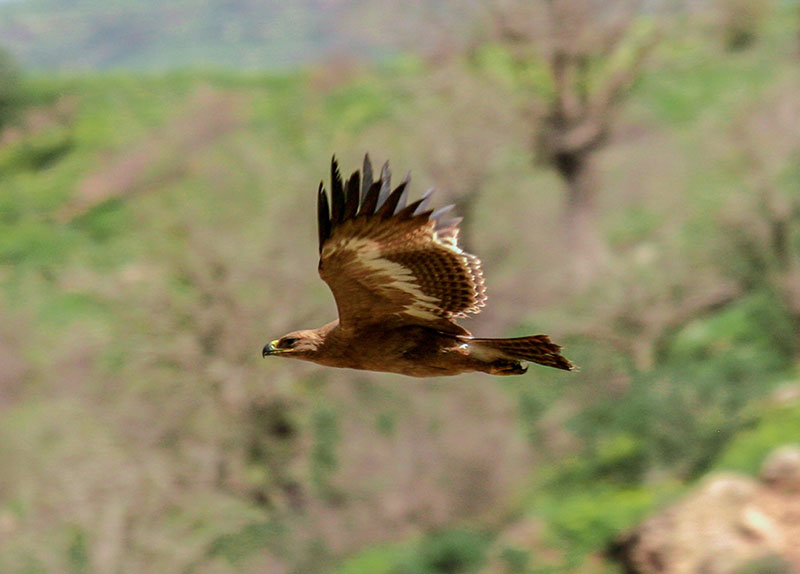 The CMS CoP accepted the principle of conservation through sustainable use in 2011. The Saker Project provides a practical example of the implementation of this principle.  At the BirdLife Flyways Conference in Abu Dhabi in April 2018, during a one-day symposium on the implementation of the CMS Saker Falcon Global Action Plan, the issues of conservation through sustainable use were discussed and received a measure of acceptance.

Assessment of Current Trade: Reliable estimates of the numbers of Saker falcons traded are not available, but it has been estimated that 6,000 and 9,000 Sakers, mostly young females, have been imported annually to the Gulf region.  Since illegal trafficking also causes significant mortalities during trapping and smuggling at least a 5% this mortality rate must be added to the import figure. This certainly contributed to the observed population declines.

The falconry community is seriously concerned about this situation, not only because of its negative reflection on falconry, but also because of our conservation commitment and our concerns for the Saker.

Assessment of the Pros and Cons of a Legal Harvest: Since illegal harvest is a significant factor in the Saker population decline and that this is undesirable and unacceptable, we need to consider the following alternatives: 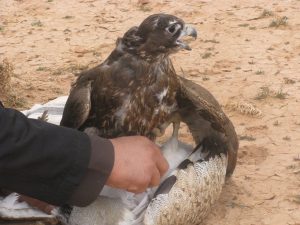 Photo Credit: International Association for Falconry and Conservation of Birds of Prey

It is evident that no single approach is ideal.  Realistically, we would propose that measures to address the unsustainable illegal trafficking in Saker falcons should include elements of points 2, 3 and 4.

There are a range of conservation actions which can affect the conservation status of the Saker falcon.  The ultimate objective would be downlisting the IUCN Red List status of the Saker falcon from Endangered to Least Concern.  That this is achievable, has been demonstrated by successful falconer-led efforts to restore the Peregrine falcon. This bird of prey was decimated by pesticides in the 1960s; now the Peregrine is considered Least Concern.

Recognition of the importance of sustainable use in the conservation of the species is, however, essential.  In 2016, efforts to downlist the Peregrine falcon at the CITES CoP failed, despite its improved conservation status, and despite of good supporting scientific evidence that the species not under threat by illegal trade.

The Saker falcon is highly valued by falconers in the Gulf region; it is, therefore, reasonable to expect that significant funding will be made available to develop and implement Saker conservation efforts.  Additionally, recognition of the Saker as a “natural asset” within range states will result in conservation measures benefitting local communities, supporting habitat improvement and restricting illegal trade:

The Saker falcon is the only currently endangered raptor popular with falconers.  The threats to the Saker are not primarily related to overharvesting, as was initially proposed. To solve the problem, falconers must be incentivized to champion Saker conservation.  The development of a sustainable legal harvest based on calculated yearly surplus of young Sakers as a result of conservation measures will be a workable solution.

It will require broad support and determination from the conservation community to succeed.  Many other species of steppe raptors will benefit from the measures taken as these other raptors silently disappeared along with the Saker.