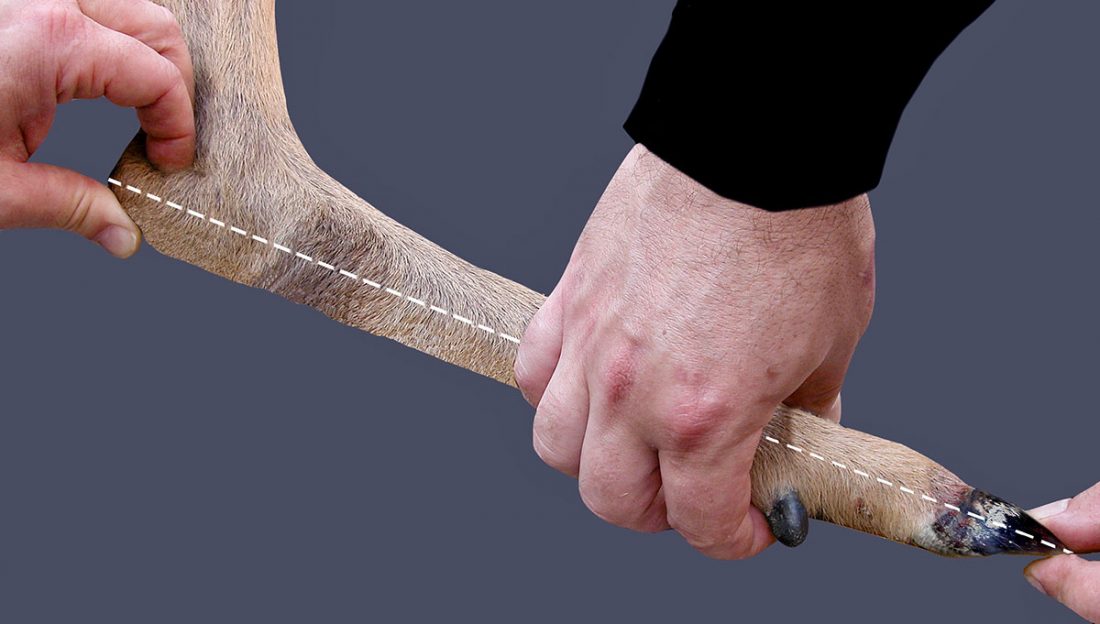 The correct way to measure the length of the hind leg of a roe deer. (A. De Marinis)
April 1, 2019 In April 2019 - Volume I-2, Citizen Conservationist By Stefano Mattioli

The Value of Biometric Monitoring in the Management of European Ungulates

Across Europe, biometric monitoring—that is, assessing physical parameters—is a common practice in the management of controlled hunting of ungulates (hoofed mammals) such as deer, moose, chamois, ibex, mouflon and wild boar. In most countries, successful hunters are required to bring their game to a check station, where the animals are weighed, measured and often evaluated for their condition and reproductive status. This biometric data can be useful for many purposes. First of all, a collection of data from a sufficiently wide set of measurements can produce a “morphometric characterization” of a population—the detailed description of its normal morphological and biometric features.

However, regardless of the “unionization” of Europe, hunting practices, rules and traditions across the continent continue to be quite different; this is true of biometric monitoring also. Researchers have on many occasions pointed out how valuable it would be to standardize the measurement of species’ body weight and size, as well as antlers, horns and mandibles.

If these combinations of physical characteristics are taken in a standardized way, with the same methods used by all researchers, it is possible to compare one population with others. In Scandinavia, countries have been discussing and sharing common methods of measuring ungulates, as codified in a booklet edited by Langvatn (1977), but such standardization of measurements is an elusive goal.

Recording body weight would seem to be simple, but some wildlife technicians weigh the entire animal; others record the dressed (eviscerated) weight—with or without the head or thoracic organs; and Scandinavian technicians measure the dressed weight without skin and legs. Similarly, the mandible length of red deer may be measured in three or four different ways. Standardization is, as noted, elusive.

Certain measurements, such as weight, mandible length or hind-leg length, can be used to track changes in body size or condition over time. French scientists have often proposed using biometric surveys in place of animal censuses; mean hind-leg or mandible length for age classes and sexes are considered more meaningful than herd numbers in evaluating the condition of a species in order to develop management strategies (Zannèse et al., 2006; Morellet et al., 2007).

Body size and growth of ungulates tend to respond to fluctuations in food and climate. A sudden decrease in certain parameters, such as body weight or mandible length, can signal a critical moment for a population. Moreover, when such biometric data are related to data on age and reproduction (the occurrence and the number of corpora lutea in the ovaries or the number of fetuses in the uteri of females), important life-history traits of a species can be investigated—for example, the threshold body weight for pregnancy and whether it is affected by age class, or if the litter size depends on the mother’s body weight and so forth.

Let me relate our experience with biometric surveys in Italy, in the northern Apennine hills and mountains near Bologna: in this area of 2,000 square kilometers (772 square miles) live 20,000 to 25,000 roe deer, 5,000 to 6,000 wild boar, 1,500 red deer and 1,200 fallow deer. Such consistency in the ungulate populations is a relatively recent phenomenon here, where native species were eradicated in the late 18th Century. Ungulates returned starting only from the middle of the 20th Century, thanks to reintroduction and introduction programs. As well, the abandonment of mountain areas by farmers and the consequent recovery of natural vegetation facilitated the increase and expansion of these species.

Active game management began in the Apennines only in 1990, with the first training courses for “selective hunters” and the first deer censuses. In 1993, the first experimental selective hunting took place. In 1995, we begin to collaborate with local hunters (there are now around 1,500 in the area) in gathering species census data and developing quotas, and the following year we involved some of them in biometric surveying. We prepared a 12-hour course and, by means of a final exam, we selected a number of trained hunters to carry out biometric examination of the deer and boar harvest.

The involvement of hunters in our surveying has proved to be very positive and, in 2000, the new laws on wildlife protection and hunting in the Emilia-Romagna administrative region incorporated biometric surveyors among the official figures involved in game management. To standardize our procedures of measurement on the national scale, the Italian Institute for Environmental Protection and Research published a handbook (Mattioli & De Marinis, 2009).

Now, every year, around 200 highly trained hunters in 10 check stations across the province examine and measure about 2,400 roe deer, 200 fallow deer and 440 red deer. By the end of the hunting season, all trophies of male roe, fallow and red deer have been weighed and a committee of the CIC—the International Council for Game and Wildlife Conservation—evaluates the best ones. Then, each May, the trophies are shown in the traditional provincial exhibition.

A biologist assesses all harvested animals for age, measures their skulls and mandibles, computerizes this data and performs the statistical analysis. Our monitoring must accurately represent whole populations; this is why, for example, we measure and weigh the antlers of all young and adult males, not just the medal-scoring trophies. We are also interested to see whether the medal-trophy specimens are superior in most of their physical features and how frequently they appear in the population.

Through close collaboration between selective hunters, biometric surveyors and biologists, over 22 years we have collected data on 41,000 roe deer, 2,800 fallow deer and 5,000 red deer, and our knowledge of the ungulates of the northern Apennines has grown tremendously. Collected data permitted, for example, the morphometric characterization of local roe deer (Mattioli, 2003; Mattioli & Spada, 2009), which has shown them to be among the largest in Europe. Adult Apennine roebucks have a mean pre-rut whole body weight of 29.6 kg (65.26 lbs) with a maximum recorded of 39.8 kg (87.74 lbs). Mild winters, broadleaf forests and both open pastures and cultivated fields make the Apennines highly suitable not only for roe, but also for red deer; adult stags can reach 330 kg (728 lbs) in pre-rut live weight and 12.4 kg (27.34 lbs). We are now studying the effects of climatic variation and habitat quality on body size and growth of red deer.

Close cooperation between hunters and researchers has proven to be extremely valuable for scientific management of wild game species and habitat.