If your travels take you to the historic town of Nuremberg in southern Germany, the Restaurant Waidwerk is a good place to savor roe deer and other game from the own hunting grounds of Chef Valentin Rottner.

Restaurant “Waidwerk” received a Michelin star just one year after opening. The “Waidwerk” restaurant is housed in a separate room of the Gasthaus Rottner, an idyllic half-timbered ensemble that has been owned by the family since 1812. This restaurant has always been a good address in Nuremberg gastronomy. Today, the Gasthaus Rottner presents a casual mix of a Michelin star restaurant, an à la carte restaurant, a beer garden shaded by mighty trees, and an attached 4-star hotel.

The name of the restaurant is at the same time program and vocation (the word “Waidwerk” has its origin in Middle High German word Weidewerc, which means the trade or craft of artisanal and ethical hunting) for the restaurant’s proprietor, Valentin Rottner.  He is an enthusiastic hunter since the age of fifteen. His dedication to ethical hunting and using every bit of the hunted animal is highlighted by a set of red deer antlers, which dominates the otherwise rather minimalist guest room. These antlers were a gift from grandfather Konrad Rottner to four-year-old Valentin; for many years the head adorned the boy’s room before it was moved to the present location.

Valentin Rottner is neither avant-garde nor revolutionary—he concocts spectacular plates like a powerfully sour-salty marinated trout delicately flavored with elderberry and herbal oil, accompanied by red veined dock leaves (Rumex sanguineus), horseradish pearls, and a combination of deep-fried, sautéed, blanched marigold. As homage to the Franconian region the chef adds crumbed Ingreisch (the roe of the regional carp, bred and harvested in the nearby Aischgrund).

Valentin Rossner always keeps the balance between the classical and the modern. Despite all of his local patriotism, this chef does not represent the typical dogmatic regionalist; he usually leaves the main roles in the flavor-game to salt and nuanced acidity.

Valentin Rossner understudied renowned chef Alexander Hermann in Wirsberg, then went to Johannes King and Alexandro Pape in Sylt (an island close to the German-Danish border, known for its long beaches, and international resorts); after that he had a formative period with Nils Henkel in Bergisch Gladbach. All of them accoladed with one, two or three Michelin stars. Therefore, in 2015, Valentin was well prepared when he returned to his parents’ inn.

As a main course, the chef presents his hunter’s pride (Waidmannsstolz in German): a generous third of the saddle of roe deer, harvested in his own hunting area close to Iphofen (a little town known for its rare complete medieval town wall and other historic buildings, as well as for being located in the heart of the Franconian wine producing region) reflects Valentin’s hunter’s pride. This piece de resistance is seared on the bone and finished in the oven. At the table, the waiter separates the venison from the bone with a spoon. It’s a revelation on the palate—roe deer venison that tastes of nothing other than roe deer, not a bit floury, without the hint of any livery hautgoût. 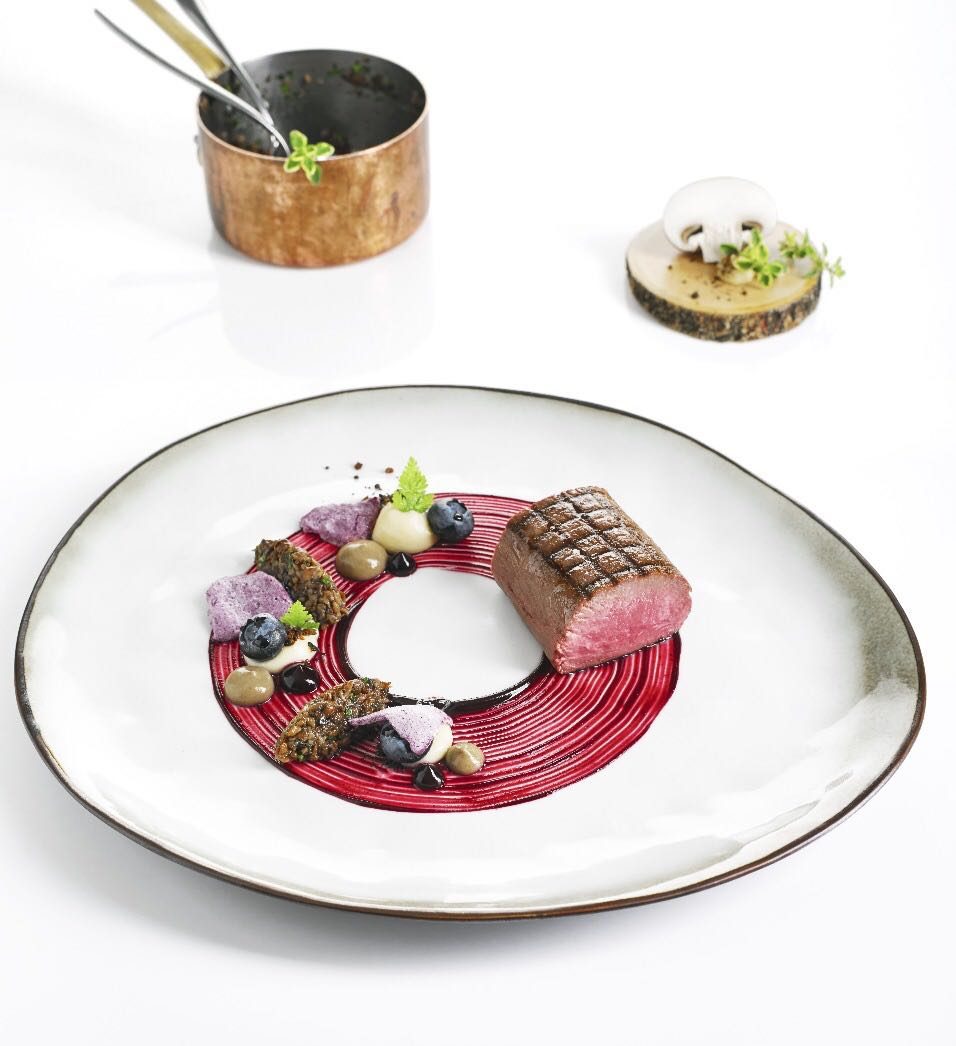 This wonderful plate is a true reflection of the best part of an animal that has lived a healthy life in the woods and meadows. Its pure forestry taste is not overlaid by any dalliances. The jus is not too heavy—not the usual syrup—but rather a strong consommé; blueberries as gel and fruit help toward creating the beautiful illusion of standing on a forest clearing covered by morning dew.

Banner Image: The main front of the old Gasthaus, with its timbered façade and opulent gardens; Valentin Rottner Photo