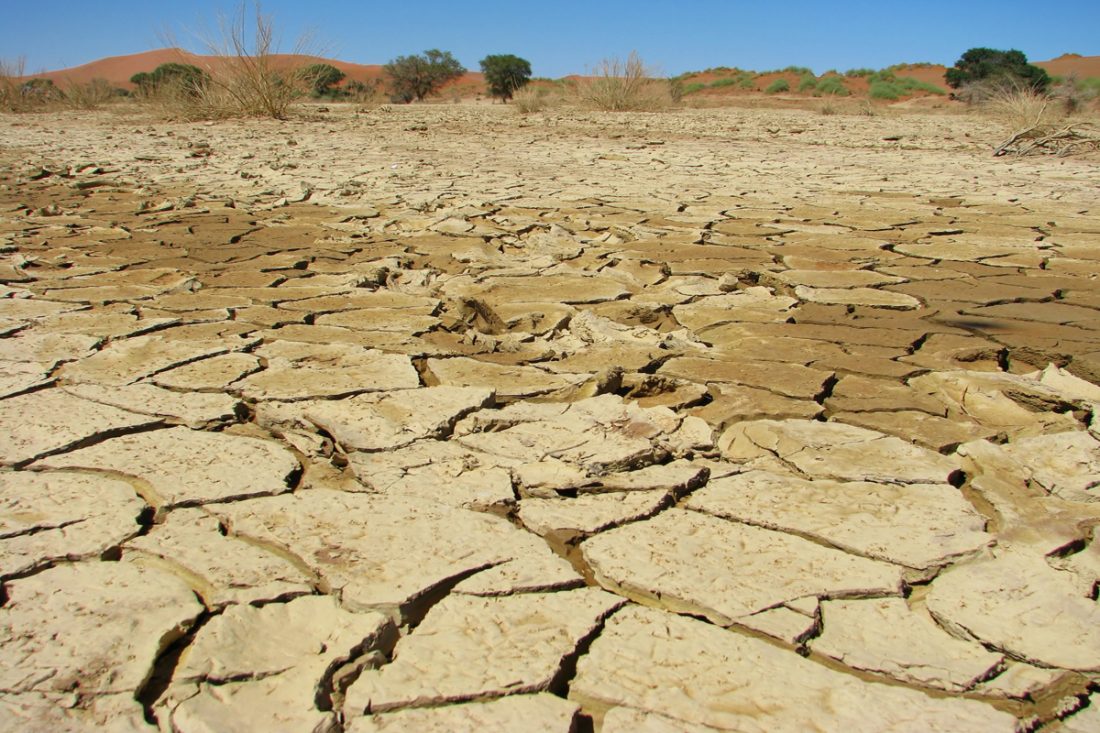 In Damaraland, in Namibia, where drought and rising temperatures threaten people and domestic animals, lions are thriving.

Driving through the communal conservancies in Damaraland, in northwestern Namibia, is like driving through a desolate moonscape, with huge areas of broken, baking basalt and other volcanic rock. When I was last there, in mid-September, wildlife—which conservancies like Torra, Twyfelfontein, Ananeb and Palmwag encourage, as it brings income from tourism and carefully regulated hunting—was extremely sparse. Whatever vegetation had survived the months of drought was parched, and cattle were wearily searching for grazing and shade.

Damaraland, like the rest of Namibia and much of southern Africa, is again in the grips of severe drought. The rainy season due in October 2018 was a month late and then brought only about 55% of normal rainfall, and Namibia had not recovered from the 2014-16 El Niño-related drought. A series of poor rainy seasons started in 2013.

(Some rain finally fell in northern Namibia in November 2019 and again in December, when flash floods washed away topsoil, but as I write this in early December it is too early to say that the drought has broken.)

Last May, President Hage Geingob declared a national drought emergency in Namibia, the second in three years. Government figures indicated that the failure of the rains had left 500,000 people—a fifth of the country’s population—dangerously short of food and in need of government assistance. Small-scale livestock farmers in arid areas like Damaraland have been hit particularly badly, with the Ministry of Agriculture, Water and Forestry reporting that 63,700 domestic animals had died in 2018 because of the drought.

Tens of thousands more have died in 2019. One Herero farmer from Damaraland, Reagan Kavazeua, told me that he’d lost seven of his 41 cattle to drought and had been forced to pay a landowner in central Namibia to allow his cattle to graze there, where there was more fodder and water.

Damaraland—along with the adjacent Skeleton Coast region, northern Kunene and the arid western districts bordering Etosha National Park—contain an important population of desert-adapted lions, whose numbers have increased substantially over the past 25 years. In 2017, their population was estimated to have reached 150 and may now number around 160, according to leading Namibian conservationist Chris Brown. 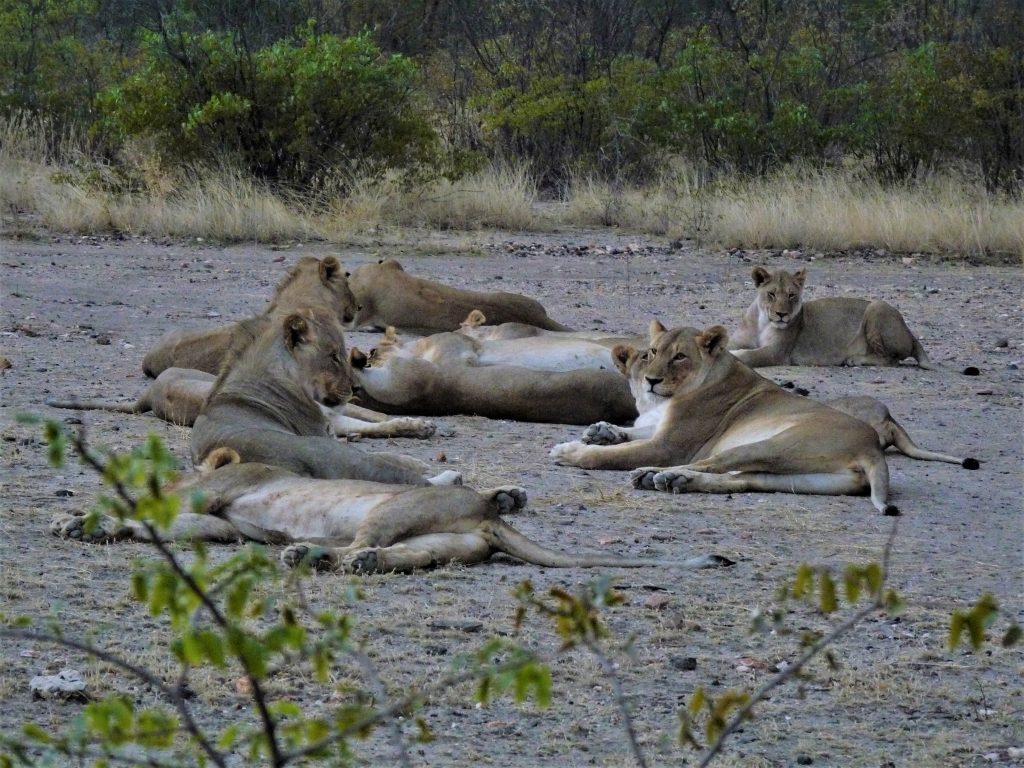 This is an amazing recovery. When researching my book on the history of human-lion relations (Humans and Lions: Conflict, Conservation and Coexistence), I learned that Dr. Flip Stander, the leading expert on these desert-living lions, believed that by 1991 there were no lions left in the Skeleton Coast-Kunene-Damaraland area. However, in 1993, he discovered lions there again. They were hunting the river valleys for gemsbok, giraffe and other wild prey, and also local farmers’ cattle and small stock.

The development of the Namibian conservancy system in the 1990s saved these desert lions. The conservancies help mitigate human-animal conflict. They increase local communities’ tolerance of lions by fostering a sense of ownership of wildlife that comes with regular, dependable income from high-cost/low volume wildlife tourism and regulated trophy hunting. In northwestern Namibia, this includes a small annual quota of lions.

There, conservancies earn US$10,000 from each lion permit in addition to income from employment and providing accommodation, food and transport. If this income were lost—according to a report on trophy hunting by IUCN, the International Union for Conservation of Nature, and a study by World Wildlife Fund conservation scientist Dr. Robin Naidoo and others—conservancies would be unable to cover their costs and the incentive to tolerate dangerous and destructive wildlife would disappear.

A 2016 study by the Namibian Ministry of the Environment found that 11 conservancies in Kunene-Damaraland had annual losses of livestock to predators worth N$100,000 to N$480,000 (US$6,850 – US$29,000). The report also noted that drought created more conflict between pastoralists and lions, with 27 lions reported killed for stock raiding between 2013 and 2015.

(The likelihood is that many more were killed covertly and buried in what one livestock owner described as “shoot, shift and shovel” incidents, which avoided the chance of any problems with the authorities.)

This brings us back to the drought. Animals that survived found food and water in the river valleys that run west through Damaraland to the sea. These valleys have always been refuges; they are now even more important havens for wildlife and for cattle. And they are hunting grounds for lions.

In the Huab River valley, in Torra conservancy in September, I met a young Himba herder with 50 cattle in an area where there was water from natural springs surrounded by lush vegetation. His family had moved their cattle into the valley when they ran out of food in their home area, to the east. Lions had already taken two of their animals—but, he said, more would have been killed had they stayed where they usually grazed their cattle.

Drought magnified the danger to livestock and increased the retaliatory killing of lions. But research shows that drought also creates opportunities for lions. The veteran conservationist Garth Owen-Smith has noted that droughts can be a bounty for lions, one that lets their numbers increase. This is because carcasses from dying animals (wild or domestic) and concentrations of livestock in the river valleys provide extra food. The gathering of weakened cattle at boreholes within the conservancies also provides easy prey for lions. 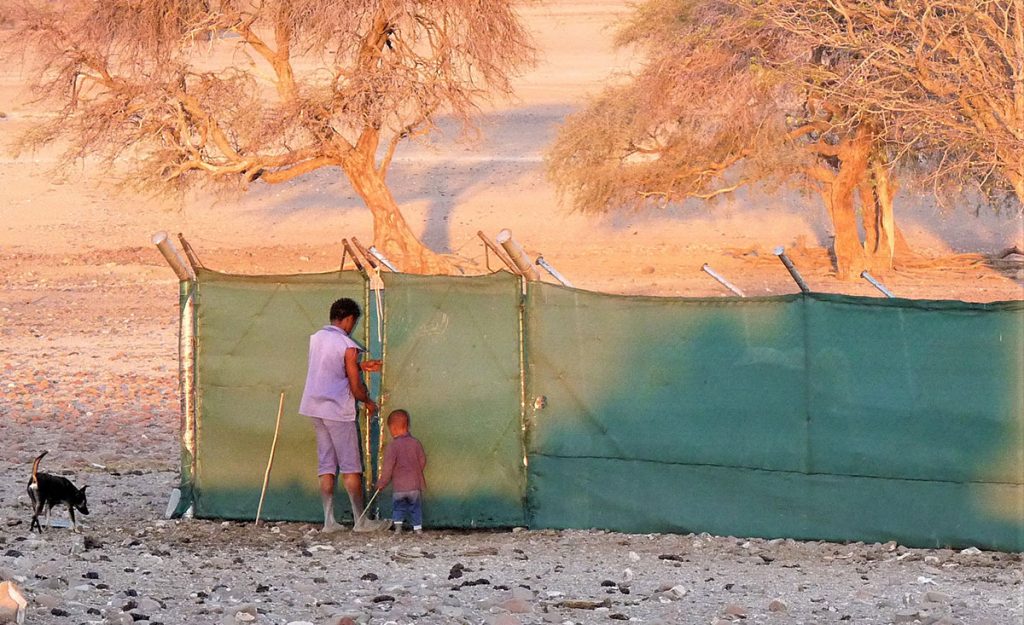 Ironically, then, despite more retaliatory killings by pastoralists, during the past seven years Namibia’s desert-lion numbers have increased during the worst droughts because of this availability of food. The current drought also offers hunting/scavenging opportunities for the lions while increasing conflict with people. It would not be surprising, based on research and my own reading of reports from previous droughts, if there were an increase in predation of stock and then shooting or poisoning of lions in response. This might continue once the drought breaks and before natural prey species begin to recover.

Something that could limit losses to lions, and thus retaliatory killing of predators, is the improved security measures I saw recently in some of the conservancies. Thanks to radio collars and solar-powered tracking aerials, pastoralists can now receive early warning of the approach of lions; and at night their livestock are better protected in chain-link bomas, on well-dug-in posts, surrounded by dark shade cloth so the stock aren’t panicked by the sight of lions.

The income provided by tourism and, in some conservancies, trophy hunting also provides solar-powered pumps at boreholes, which enable more cattle to survive droughts. As well, elephants and other wildlife are increasingly tolerated at these boreholes because of the income they help generate.

It is through such sustainable-conservation efforts that not only drought but also conflict can be mitigated, benefitting local people, their livestock and the lions.

Prof. Keith Somerville is a senior research fellow at the Institute of Commonwealth Studies, School of Advanced Study, University of London. He is also a member of the Durrell Institute of Conservation and Ecology at the University of Kent, a fellow of the Zoological Society of London and a member of the IUCN CEESP/SSC Sustainable Use and Livelihoods Specialist Group. His book, Humans and Lions: Conflict, Conservation and Coexistence, was published in July 2019.