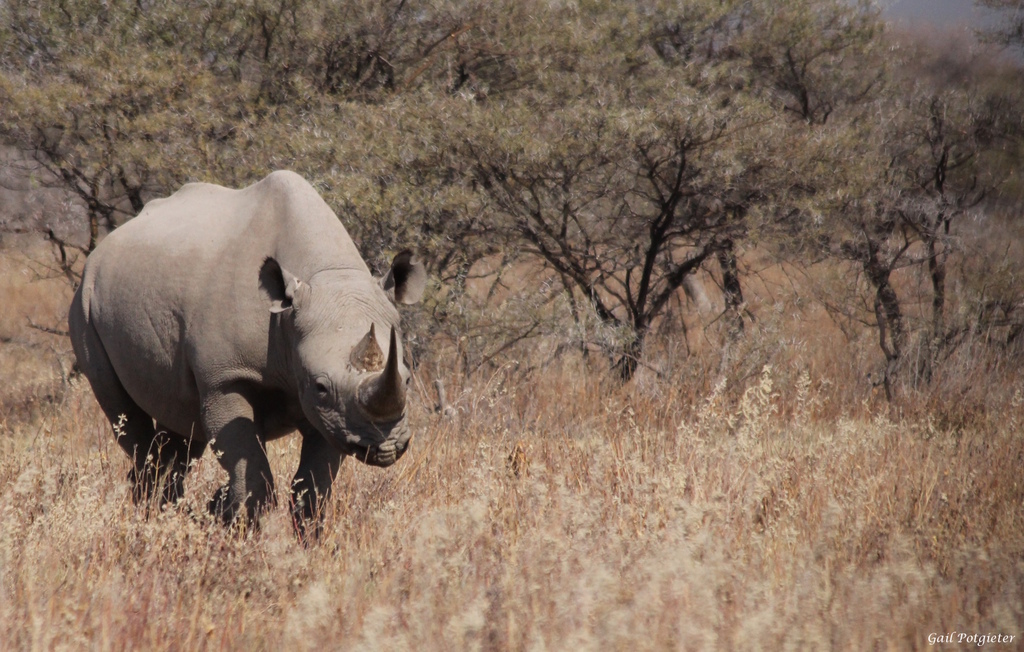 How hunting black rhino contributes to conservation in Namibia

A strong argument for continuing to hunt male black rhino—to increase the funding of conservation of the species, reduce rhino poaching, increase rhino population growth, safeguard the genetic integrity of Namibia’s black rhino and respect the rights and needs of rural communities.

Conservation organizations in Namibia support the recent decision by the US Fish and Wildlife Service to grant an import permit for a black rhino trophy from our country. However, responses to this decision from some US organizations and the public reveal that there is still strong opposition to hunting. We believe that this opposition stems from a lack of knowledge and understanding of how hunting fits into the Namibian conservation model. Please allow us to explain.

Against the backdrop of a global extinction crisis and a booming illegal wildlife trade that fuels poaching throughout Africa, Namibia is an exceptional conservation success story. We are among a handful of countries in the world that have enabled wild animals like rhinos to increase in their natural habitat. After nearly losing all our precious free-ranging black rhinos during the dark apartheid era, we are proud of the fact that today Namibia has close to 2,000 black rhinos. These account for 33% of the entire black rhino species and 85% of the southwestern subspecies.

By global standards, Namibia is not a wealthy country. Many Namibians struggle to meet their daily needs in the harsh desert environment, a situation that may worsen with climate change. Our government is faced with numerous competing socio-economic demands for its scarce resources—in education, health and drought relief, to name a few. Dedicating funds to protect black rhinos from poachers while simultaneously meeting manifold development challenges is tough, to say the least.

The Namibian solution to this daunting task is to use the full value of our rhinos and other wildlife to fund conservation and sustainable development. In a welcome departure from the exclusionary policies of the past, our post-apartheid independent government has included local people as key partners in and beneficiaries of wildlife conservation.

The direct benefits from wildlife include income and improved food security from photographic and hunting tourism, which operate within the same areas in Namibia without negatively affecting each other. A recent study of Namibian communal areas found that, while the two industries are complementary, photographic tourism could not fully replace hunting if the latter were banned. These tourism sectors together generate significant income from Namibia’s wildlife, which funds conservation.

Notwithstanding the significant heritage and ecological value of black rhinos, they cannot be effectively protected from poachers without substantial funds. The US$400,000 paid to the Game Products Trust Fund for the recent black rhino hunt provided a welcome boost to Namibian conservation. The GPTF links income from government wildlife sales and trophy fees directly to on-the-ground conservation.

From 2012-2018, GPTF spent over US$7.5 million on conservation projects in Namibia; 61% of this expenditure (about US$4.6 million) was dedicated to anti-poaching and rhino population management (Figure 1). US$2.3 million of this budget provides direct support for anti-poaching teams. 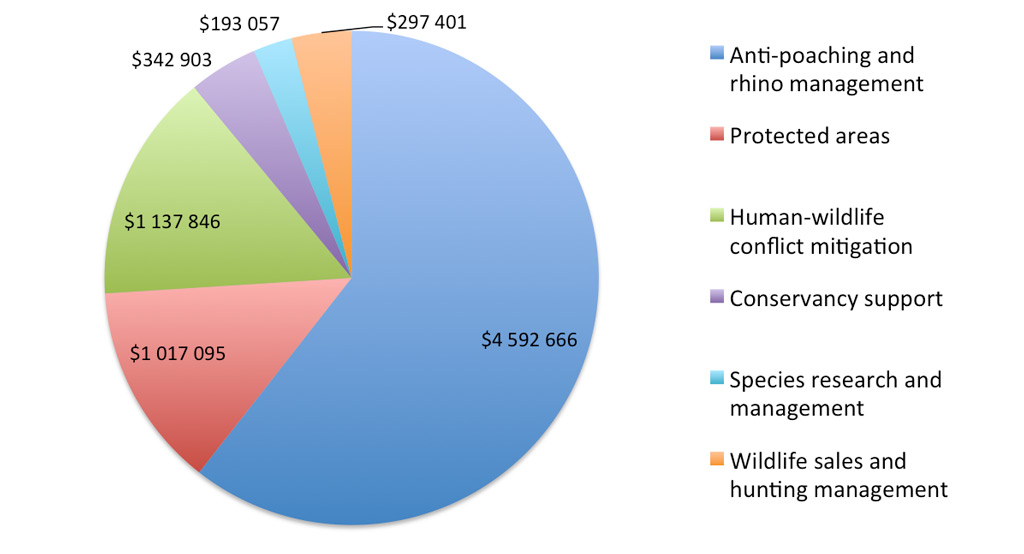 The remaining funds are used for anti-poaching vehicles (including helicopters and boats), managing and monitoring rhino populations, and rewarding informants who provide tip-offs leading to poacher arrests (Figure 2). 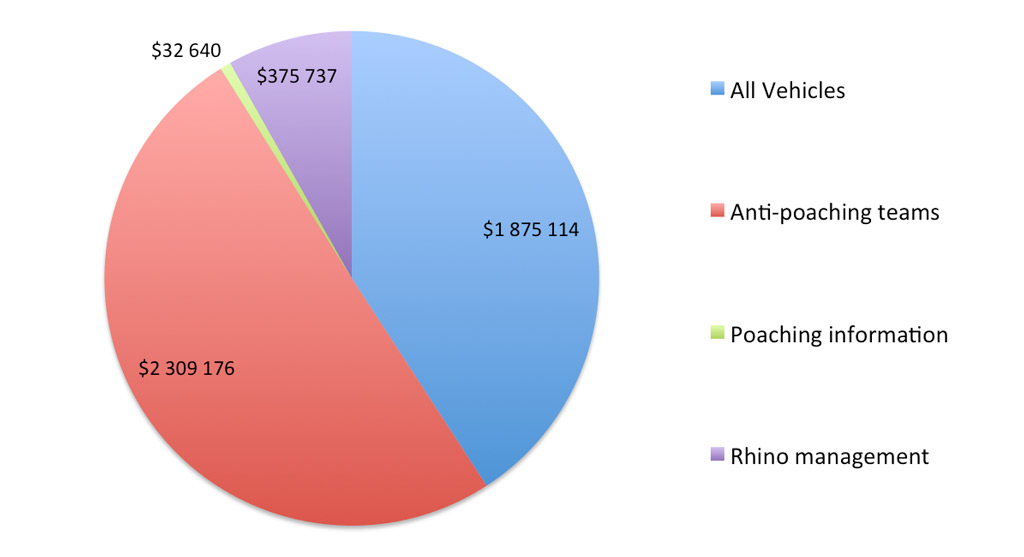 Namibia’s substantial rhino populations have unfortunately attracted organized poaching syndicates. To counteract increased poaching in 2014 and 2015, the government and its partners mobilized funding from GPTF and other sources to strengthen and coordinate their anti-poaching efforts. Consequently, black rhino poaching declined by 33% during the past three years. Etosha National Park, which hosts the largest rhino population in the country, reported fewer than 30 incidents in 2018, down from a high of 80 in 2015. Even more impressive, communal conservancies that host free-ranging black rhinos have recorded zero poaching incidents during the past two years!

Considering the successful Namibian conservation model and our collective colossal efforts to reduce poaching, the recent public comments suggesting that money from the black rhino hunt would be misappropriated are especially offensive. The “animals first” message promoted by animal rights and welfare organizations has alienated rural communities throughout Africa as it disregards their rights and ignores their needs. For wildlife, the result is widespread habitat loss and animal extermination. While certain ideologues want to pressure Namibia into accepting this lose-lose scenario, we would rather support the proven, home-grown strategy that reaps rewards for people and wildlife. We invite you to visit Namibia and see our success for yourselves.

Gail Potgieter is a carnivore conservationist who has worked in South Africa, Namibia and Botswana on human-carnivore conflict, community conservation and wildlife monitoring. Her published scientific work includes journal articles, technical reports and chapters in scientific books. She recently established an independent company in Namibia that offers communication and conservation services for environmental non-governmental organizations. In particular, she is interested in promoting clear public communication of science and conservation efforts in southern Africa.

Dr. Chris Brown, ecologist, and environmental scientist, has more than 35 years of practical experience in environmental management and administration, strategic planning and development, project and program design and coordination. Previously, he headed the Namibia Directorate of Environmental Affairs in the Ministry of Environment and Tourism and played a key role in drafting the environmental clauses in the Namibian Constitution. He was the Executive Director of the Namibia Nature Foundation for 12 years. He serves on several boards including that of Namibia’s Sustainable Development Advisory Council. Dr. Brown holds a PhD Zoology (Conservation biology), BSc Hons degree (Zoology) and a BSc degree (Zoology, Entomology, Biochemistry). He is currently the CEO of The Namibian Chamber of Environment.

This article was first published by Africa Geographic as an opinion post on 10 October 2019. Republished with permission.