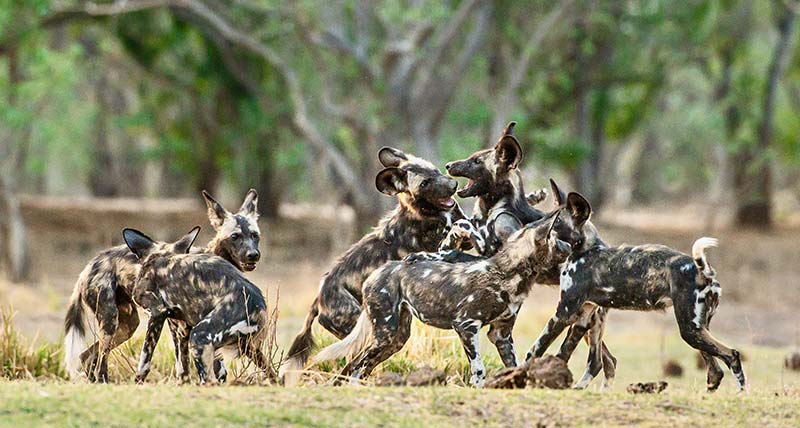 These elusive, intelligent, charismatic creatures are now classified as critically endangered on the IUCN Red List. We hope that coverage such as this will aid their conservation in the wild.

My new book, Africa’s Wild Dogs: A Survival Story, shows and shares what I have experienced and what I have learned about African wild dogs. Over the past 10 years, I have been lucky enough to spend many hours watching packs of these dogs in South Africa, Zimbabwe, Botswana and Tanzania. Wild dogs are a quintessential part of Africa, as charismatic and ecologically significant as their more famous neighbors—elephants, lions, rhinos and other admired species. Africa’s wild dogs are just as worthy of recognition, protection and conservation.

Seeing a wild dog pack is a rare occurrence, especially in vast wild areas such as the 54,600 square-kilometre (21,000 sq mi) Selous Game Reserve in Tanzania. Nomadic by nature, each dog pack ranges across many hundreds of square kilometres each year. This sometimes makes tracking them difficult, requiring many predawn hours spent searching the bushveld. I quickly came to realise that you never find the dogs—they find you. And, as my fellow photographers will agree, capturing striking images of them is far from easy. It takes great patience and awareness, things the dogs taught me.

African wild dogs—Lycaon pictus, also known as painted wolves or Cape hunting dogs—are beautiful, intelligent, intensely sociable and social animals. They are not ordinary canids, but rather a distinct and ancient genome. Wild dogs do not bark or howl; they twitter or “sneeze.” Their legs are long and stick-like and they have four toes on their front feet rather than five, which helps them hit speeds of up to 45 miles per hour. Their enormous ears swivel and focus like radar dishes. 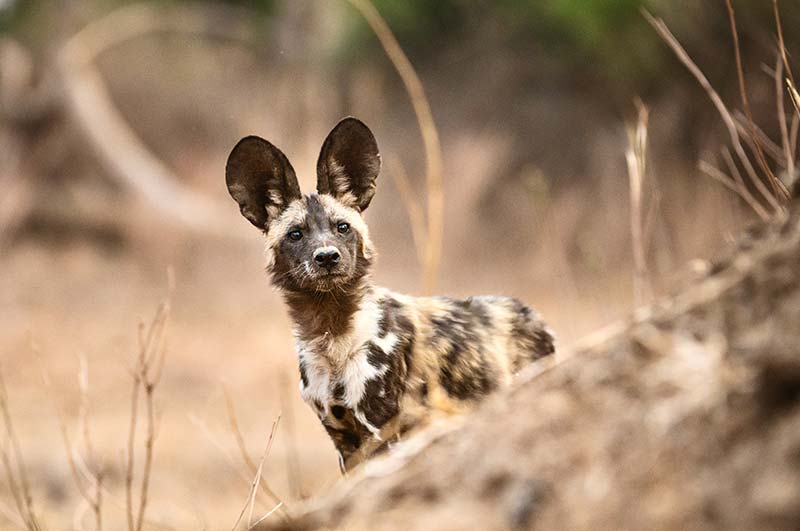 Like satellite dishes, wild dogs’ large ears can swivel to better hear each other’s vocalizations and to track prey. This is a sub-adult whose legs have not yet reached full length.  Author’s photo

They are also integral to the ecosystem of the African bush. Arch-strategists, they work as close-knit teams to bring down their prey, and they are among the most successful of all four-legged hunters—the number of dogs in a pack determines the number of kills they make in a day. For their size, wild dogs consume more meat than any other carnivore. Why then are their populations in precipitous decline across much of their range?

Like so many predators, they have long been persecuted and perceived as vermin by humans. Attitudes toward them are changing now, but the IUCN, the International Union for Conservation of Nature, lists them as critically endangered. There are now only an estimated 6,600 wild dogs remaining across Africa. They face a multitude of threats and challenges, some old, some new. Lions and hyenas are the dogs’ natural competition, but climate change, poison and snares add to the conservation challenge. Finally, like all African wildlife, they are losing habitat to fragmentation, encroachment and development.

In addition, the African wild dog generally does not carry the immunity or antibodies to resist a variety of viral diseases such as canine distemper and rabies, the two most prevalent killers of the species. Infectious diseases carried by domestic dogs are often unchecked in rural communities, and this poses a threat to wild dogs (and to humans).

In the wildlife reserves where most of South Africa’s wild dogs are found, there are limited outbreaks of these diseases. But wild dogs can range up to 2,000 kilometres (1,200 miles) from their den sites, and whenever the dogs leave a reserve and encounter domestic dogs in villages nearby, they stand a good chance of infection.

South Africa’s Kruger National Park, which has many rural communities on its borders, adopted a “prevention is more practical than cure” approach. To minimize the risk of disease from domestic dogs, researchers monitoring the park’s wild dog packs try to capture and inoculate wild dog pups at an early age. Since no two wild dogs have the same coloration pattern, researchers keep track of the inoculated dogs by photographing them for identification. In other areas, programs to inoculate the village dogs are being tested, but this is an extremely costly undertaking.

We have now awoken to the need to protect wild dogs, which begins with building awareness of what we are finding out about this sophisticated animal. In my book, Africa’s Wild Dogs: A Survival Story, I have collaborated with six eminent wild dog scientists and researchers to convey how the dog packs form and grow, hunt and migrate. 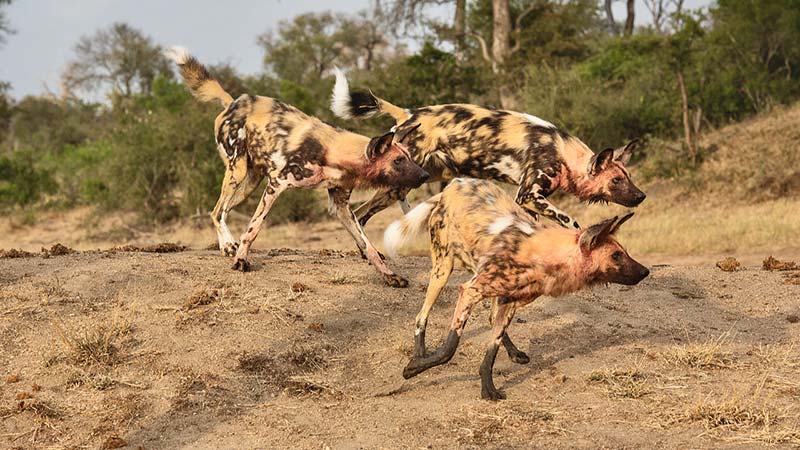 “Wild dogs are one of the most wide-ranging carnivores on the [African] continent. Several decades of habitat conversion and deliberate extermination have greatly reduced range, leaving many populations smaller, more fragmented and isolated. This increases the dogs’ vulnerability to disease outbreaks and the inherent demographic forces that inexorably drive small populations down the slippery slope towards local extinction. Reintroductions and translocations can be effective for restoring carnivores into areas where they have been eradicated—and especially where they are unlikely to re-colonise on their own.

“Conservation is complex and—even with the best of intentions—things do not always go according to plan. When attempting to mimic wild dog dispersal and new pack formation, we have been faced with challenges. There can be aggression within artificially bonded groups, and imperfect park boundaries can lead to breakouts and ensuing conflict with park neighbours. We hope that with growing knowledge about the dogs, and what makes for successful re-introductions, their numbers will rebound.”

Barring disease and predation, wild dogs generally live to the age of 12. They are highly social and loyally bond to their family pack. They are also extremely tactile. Wild dogs constantly groom and rub up against each other, and “kiss” each other on the lips. Mothers feed their pups by regurgitating. This intimate behavior facilitates the transfer of disease. Healthy dogs will lick and lie down with sick dogs, try to feed them and encourage them to stand by nosing them. Even when weak themselves, wild dogs will continue to care for those even weaker.

Though disease is responsible for wiping out entire packs of wild dogs, it is not the main killer. The growth of wild dog packs is often limited by larger, competing predators. In areas where lion and hyena numbers are high, wild dog populations often suffer. The pups are picked off by hyenas while adults may be killed by lions and hyenas both.

With all these threats, wildlife biologists must plan wild dog translocation programs extremely carefully. In order to be sustainable, dog packs are taken to reserves where they should be able to grow more than 50% of their pups to maturity.

There is significant opportunity for successful introduction and range expansion within national parks when policy makers, conservationists, local communities and the public work together to foster knowledge of the dogs and build respect and tolerance for them. Now more than ever, we are aware of the critical value of collaboration and the need for joint efforts to reach a shared conservation vision. Despite the sobering numbers, there is hope for Africa’s wild dogs.

Jocelin Kagan holds an MBA degree from Henley Management College in Oxfordshire; she is an educator, public speaker and the author of four books. As a passionate advocate for wild dogs, she has been tracking and photographing them since 2010 and has been involved in international campaigns to raise funds for their conservation. This article is from her latest book, Africa’s Wild Dogs: A Survival Story, published by Merlin Unwin Books and available on Amazon and, in South Africa, via Penguin Random House. All royalties go to the African Wild Dogs Survival Fund.