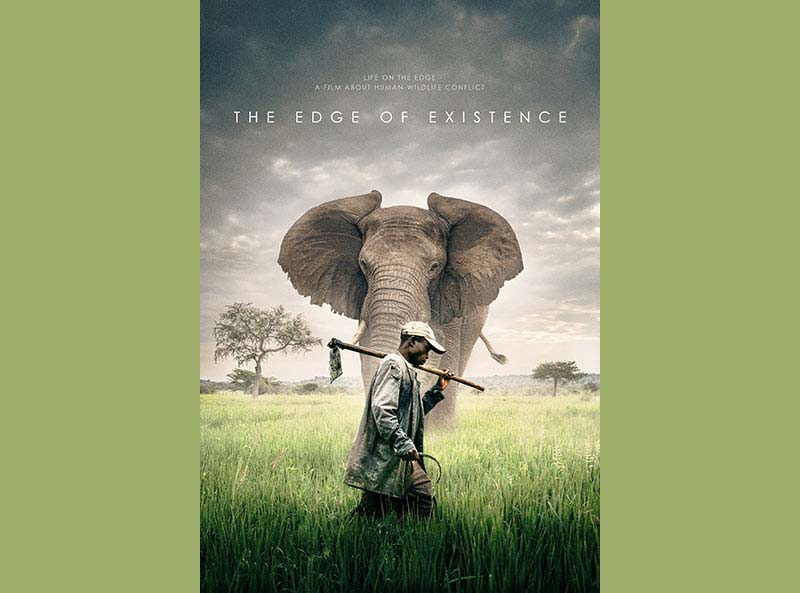 Film Review: ‘The Edge of Existence’

Filmed at the western boundary of the Singita-Grumeti concession area in Tanzania, this 87-minute feature documentary puts viewers in the middle of Africa’s human-wildlife conflict.

“The Edge of Existence” opens with a beautiful aerial shot of the African landscape. Ominous music accompanies military-style graphics superimposed on the drone shot, imprinting on the audience the uncomfortable fact that only a dirt road separates human settlements from a wildlife area. It is a reminder of the knife-edge division between civilization and wilderness in some parts of the world, and the increasing pressures that each place upon the other.

Without much warning, the camera dives back to the ground and joins a funeral, following people as they mourn a member of the village killed by an elephant. It’s a frantic scene, and the handheld camera latches onto one of the subjects of the film as it traces the harrowing evidence of the animal trampling its victim. Images of dried blood and cries of anguish make it abundantly clear that the filmmakers do not intend to soften the severity of the situation, or their topic.

“The Edge of Existence,” directed by South African filmmakers James Suter and Charlie Luckock and first shown at the recent Ireland Wildlife Film Festival, delves into the complex issues of human-wildlife conflict in the Western Corridor of the Serengeti, in Tanzania. Following subjects from diverse backgrounds, the viewer gets a strong sense of the challenges faced by people “on the ground.” Over 87 minutes, a farmer, a poacher, a game scout and a conservationist give us an array of stories that provide context for an objective narrative. We share honest and truthful moments with these individuals, and there is a vulnerability to the film that taps into a deep sense of the human condition.

Wildlife and wild landscapes have many champions, but the struggles of rural communities and local conservationists rarely reach “armchair” environmentalists and their social-media streams. Suter and Luckock guide the viewer into the heart of this divide and present multiple perspectives, revealing a naked truth—the villagers’ everlasting fight to make ends meet and even to survive—while simultaneously exposing the real threats facing iconic wilderness areas. These candid accounts force viewers to reevaluate their perceptions of conservation methods and approaches.

The situation is dire, and there are no mulligans. Human-wildlife conflict is a complex conundrum and if solutions aren’t found soon, there will be catastrophic impacts on the environment and on the communities and wild animals that live alongside each other.

“The Edge of Existence” skillfully blends camerawork and editing to present an urgent yet entertaining film. Combinations of aerial shots and serene wildlife images make the audience acutely aware of impending dangers, while simultaneously offering the panoramic beauty that we’ve come to expect from nature films.

Oli Caldow, the cinematographer, uses the “magic hour,” the period just before sunrise or just after sunset, to great effect. These stunning images juxtapose well with the rawness of the film, bringing a sincerity to the tug-of-war between the human way of life and the power of the African wilderness. The sound design marries well with the editing, too—frantic activity is accompanied by intense music and heightened effects, while moments of peace are allowed to breathe with silence and the natural sounds of Africa.

“The Edge of Existence” presents its complexities in a comprehensive and digestible manner. It strikes a wonderful balance between the need for solutions and the beauty of Africa, making the film both enthralling and didactic. The film believes strongly that humans and animals can coexist, and that listening to people on the scene is important. The film intends to be a catalyst in the search for solutions (or at least compromises) that accommodate villagers, conservationists, concession managers and wildlife. There are no simple answers, only some controversial possibilities. But the film gives us the real questions, and that’s a beginning.

[Ed. note: In 2002, American philanthropist Paul Tudor Jones established the non-profit Grumeti Fund to rehabilitate and restore the Grumeti concessions; see “The Business of Conservation” in the January 2020 issue.]