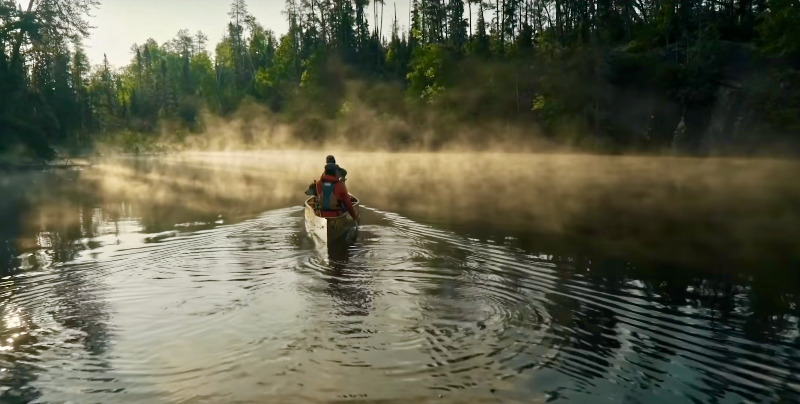 “The sacred place where life begins.” This feature-length documentary from the Patagonia company follows courageous citizens fighting the move to privatize US federal lands.

Editorially, “Public Trust” urges viewers to join the fight against the sale of America’s public lands to extractive industries. As a film, it is a statement of human rights and the impact that America’s 640 million acres of public land have on the nation’s environment and people.

Directed by David Garrett Byars, with Robert Redford as an executive producer, “Public Trust” uses Hal Herring, an award-winning journalist and contributing editor at Field and Stream magazine, to tell its story. His mission is to educate the viewer about public lands, what they contain and mean, and the potentially catastrophic consequences of privatizing these lands. Herring wants the people of America to “take a good look at what we have, how we got it and what’s at stake.”

Herring introduces us to three activists and their situations: Bernadette Demientieff, of the Gwich’in Nation and executive director of the Gwich’in Steering Committee, who fights to save the Arctic National Wildlife Refuge, specifically the Porcupine Caribou calving grounds, known as Area 1002, from oil drilling; Angelo Baca, a Navajo and Hopi filmmaker who works with the Bears Ears Inter-Tribal Coalition to protect the archeologically rich Bears Ears and Grand Staircase-Escalante monuments in Utah; and Spencer Shaver, Conservation Policy Director for Sportsmen for the Boundary Waters, who want to keep copper-mining companies out of the Boundary Waters Canoe Area Wilderness in Minnesota.

Moments of triumph in 2016, when Demientieff, Bacca and Shaver, and their groups, get what they want are contrasted by despair when these achievements are rolled back in the years that follow. These reversals illustrate an alarming truth about the fickleness of environmental laws and human rights in American politics. One begins to wonder if Yellowstone National Park is safe from gold mining, or whether the Grand Canyon might someday be plundered for uranium.

When the lens is turned on the lands themselves, the audience enters a cinematic wonderland. Byars uses aerial images to capture the grand majesty of the American landscape—breathtaking pictures, set to epic music, that stir a sense of awe and spiritual connection. They spark feelings of wanderlust and a desire to connect with nature. They are a window into the magnificent natural heritage of all Americans.

Contrasting these majestic images is grainy archival footage, highlighting the “good versus bad” agenda of the film. The archival selection is used to indicate the efforts of some politicians to sell public lands or dismantle their protections. There are no in-person interviews from the opposition; politicians who support the sale of federal lands are not given a chance to rebut and they are, quite literally, never shown in a good light.

“Public Trust” is not an objective film, nor is it meant to be one. Byars deliberately excludes any voice in favor of selling public land. For example, there is no interview with anyone at ASRC, the Arctic Slope Regional Corporation, which has been a major proponent of oil extraction in the Arctic Refuge. Whether ASRC. as one of 13 Alaska Native Regional Corporations, truly represents the people of Alaska is another question, but it does warrant noting that “Public Trust” is selective in its messaging.

Otherwise, “Public Trust” follows a conventional structure in telling its story. The editing ties together graphics, maps, charts and the American landscape in a cohesive manner, making the argument of the film easy to follow. The film also feels “personal’; it doesn’t hide from raw truths. We see the heavy burden on those fighting to save public lands—and the fight always seems to be an uphill battle. The deafening silence accompanying some of the interviews stresses the hardships these people endure in fighting for their lands and waters.

The film is important because public land issues often make the headlines only when there is open conflict, such as the 2016 occupation of the Malheur National Wildlife Refuge in Oregon. David Byars also directed “No Man’s Land,” a documentary about that 41-day standoff between federal authorities and armed militants who wanted the government to surrender control of public lands to the people of America. One could say that “Public Trust” is another side of the same coin.

Mother grizzly bear and cub in ANWR, the Arctic National Wildlife Refuge; a screenshot from the film.

On January 4, The Trump Administration announced plans to expand oil development in Alaska’s National Petroleum Reserve to about 80% of the reserve. Then, two days later, the Trump administration said it would auction off portions of Area 1002—the Porcupine Caribou Herd calving grounds—to oil-drillers. This sort of news reinforces the human-rights, environmental-impact and sustainable-use message of “Public Trust.”

The message is entirely one-sided in “Public Trust,” but the fight to conserve our environment is reaching a critical point. In the film, Hal Herring recites a powerful quote from John Jeavons, the father of the modern biointensive gardening movement, for us to reflect upon:

“Man, despite his artistic pretensions, his sophistication and many accomplishments, owes the entire fact of his existence to a six-inch layer of topsoil, and the fact that it rains.”

Banner image: In Minnesota’s Boundary Waters wilderness; a screenshot from the film.