A Conservation Paradox–The pros and cons of recreational hunting

More than 15 years ago, Andrew Loveridge wrote: “When a wildlife population is threatened, deliberately killing individuals from it may seem perverse. Yet some argue that, paradoxically, well-regulated hunting benefits wildlife populations, and may sometimes be the only way to ensure their persistence.” In his paper, Loveridge and colleagues listed many examples from all over the world where hunting has been regulated successfully. They took a deep look into hunting’s multifaceted aspects and concluded that a single characterization of its impact on conservation is necessarily simplistic.

The Helsinki and Flinders researchers note that hunting research has focused mainly on the behavior and population dynamics of large mammals in North America, Europe and Africa. Evidence is still lacking, they say, to answer the pressing questions of why hunting contributes to sustainable conservation of biodiversity in some places and not others. 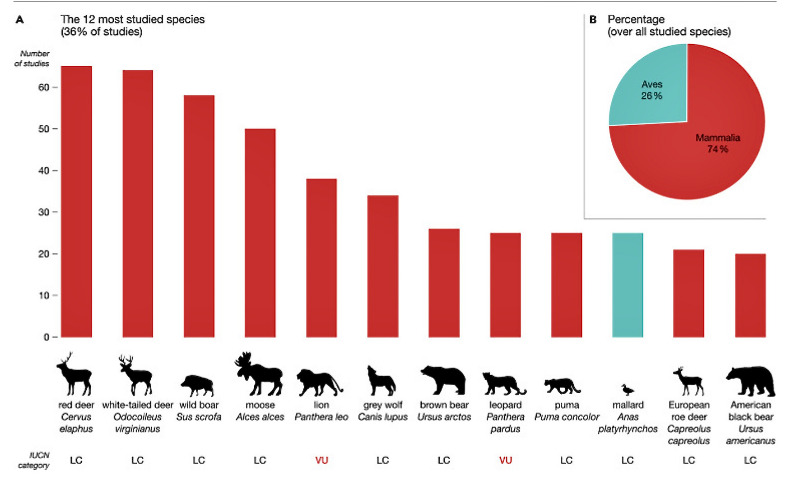 “Two-thirds of the hunting research is focused on mammals. Red deer, white-tailed deer, wild boar, moose and lion are the most well-studied. Of these species, only lion is of conservation concern, with many recommendations on how hunting can be made sustainable through hunting quotas or seasonal limits”, writes one of the authors, Dr. Hayley Clements. She adds that, “far less research has tried to examine the broader impacts of hunting on ecosystem integrity and function, and how it affects the livelihoods of local people, or to document local people’s perceptions about hunting.”

Dr. Clements also posits that “approximately 1,394,000 square kilometers [538,225 square miles] of land is dedicated for [safari] hunting in sub-Saharan Africa, yet we lack research on how effective these areas are in conserving ecosystems, and how local communities benefit from hunting. Future research should focus on the contribution of recreational hunting towards meeting both biodiversity and social objectives.”

Prof. Corey Bradshaw, another author, writes, “we used automated approaches to investigate and summarize the main topics surrounding recreational hunting. This also allowed us to determine the geographic spread and diversity of species hunted around the globe . . . drawing on these topics, we considered both the positive and negative implications of recreational hunting for nature conservation and the livelihoods and well-being of people.”

Yet he exemplified the multifaceted aspects and characterizations of hunting in his blog, ConservationBytes.com, when he posits: “I couldn’t possibly conceive of hunting a wild, indigenous species for my own personal satisfaction now . . . [and I find hunting] morally and ethically reprehensible.” He qualified this remark with, “while it might seem counterintuitive, there is evidence to suggest that some recreational hunting can deliver environmental and social benefits” and conceding that diverting land from agricultural or other types of development to priority hunting areas can in fact benefit entire ecosystems. (Celebrities and talk-show hosts take note that personal feelings should not impede logical thinking.)

It’s also encouraging that another co-author, Enrico Di Minin, who leads Helsinki University’s Laboratory of Interdisciplinary Conservation Science, said: “We have outlined a research agenda to assess the role of recreational hunting in diverse social-ecological systems, and to consider local people’s values and needs. The need for such evidence is urgent, given declining numbers of recreational hunters in some regions and increasing opposition to trophy hunting in others.”

Di Minin’s conclusions are significant in connection with the desires and needs of Indigenous peoples—as expressed, for example, in the video “Let Africans Decide” (and regarding the 30×30 initiative). Therefore, “we should also expand research beyond charismatic and common species to better assess the impact of recreational hunting on threatened and less charismatic species.”

Here, he and his co-authors are not alone—other scientists are saying the same. See Amy Dickman and her colleagues’ article “The Truth: Conservation’s Biggest Weapon.”

Ethical concerns about recreational hunting, and trophy hunting in particular, too often attract a one-sided focus of public attention; and the often-purposeful conflation of regulated hunting with poaching exacerbates this mounting problem. The Helsinki – Flinders paper pipoints where knowledge and interpretation are lacking; it also promotes reasoned dialogue and understanding the complexities and contexts around recreational hunting. The research agenda proposed by the authors will help close the knowledge gap and emphasize the importance of local socio-ecological dynamics and the voices of the people co-existing with wildlife.

The paper is a very useful contribution, and a must-read for all who value the conservation of wild habitats and wildlife around the world.

North America’s largest mammals were not hunted to extinction by humans. Instead, populations of mammoths and other large animals fluctuated with climate change—drastic cold began the decline and extinction of these megafauna around 13,000 years ago. Read the full article in our Dispatch 👉🏼https://bit.ly/3hlATXX#ConservationFirst #Wildlife ... See MoreSee Less

The links between hunting and conservation in America and the impact of declining hunter numbers on wildlife management are explored in this article. Read it all here. #ConservationFirst #Wildlife ... See MoreSee Less

Wilkinson, founder of Mountain Journal, and Sadler, its Washington, DC, correspondent, talk about the links between hunting and conservation in America and the impact of declining hunter numbers on wi...
View on Facebook
· Share

“Communities, Conservation and Livelihoods” is an exploration of how communities around the world are tackling some of the biggest global challenges—the climate, the environment—as well as local conservation goals, all the while sustaining their livelihoods. Read the full review here 👉🏼 https://bit.ly/3uWMLDc #ConservationFirst #Wildlife ... See MoreSee Less

“Science isn’t enough”--read our moving story about the passion that wildlife scientists have for their animals. Read the full thing here.#ConservationFirst #Wildlife #Lions ... See MoreSee Less

Science + Celebrity for Conservation–A call for partnership based on knowledge, not opposition driven by emotion - Conservation Frontlines

This moving essay is a response to criticism that wildlife scientists don’t seem aware that “science isn’t enough.”
View on Facebook
· Share

“There is almost nothing more integral to being human” than sharing hunted or foraged food, and the cooperation that goes with it. Read more. #ConservationFirst #Wildlife ... See MoreSee Less

“There is almost nothing more integral to being human than this sharing”—of hunted or foraged food, and the cooperation behind it.
View on Facebook
· Share

“Trophy hunting” outrages some people. Do they know what it really means? And the other kinds of hunting too? There’s no shortage of misconceptions. Read more in our article. #ConservationFirst #Wildlife ... See MoreSee Less

Hunting, Trophy and Other–A primer for the non-hunter. It may—or may not—be what you think. - Conservation Frontlines

In January, more than 50 countries—the High Ambition Coalition for Nature and People—agreed to protect at least 30% of the planet’s lands and oceans by 2030. Read more. #ConservationFirst #Wildlife ... See MoreSee Less

It’s About the Future—Yours, Ours & Theirs - Conservation Frontlines

In January, more than 50 countries—the High Ambition Coalition for Nature and People; in short, HAC—announced a bold commitment: That the Conference of Parties of the Convention on Biodiversity, s...
View on Facebook
· Share

Meet the aardwolf, a member of the hyena family but extremely shy and elusive. Read about the aardwolf in our Dispatches 👉🏼 https://bit.ly/3mGO1HK#ConservationFirst #Wildlife #Aardwolf ... See MoreSee Less

We’re excited to release our newest quarterly e-magazine, with all sorts of great articles to keep you updated on wildlife conservation across the globe. Have a read. #ConservationFirst #Wildlife ... See MoreSee Less

A turtle just found in a Vietnamese lake may be the only hope for saving the species from extinction. The turtles can weigh 400 pounds, reach six feet in length and live for a century. Read the story in our Dispatches 👉🏼 https://bit.ly/3mGO1HK #ConservationFirst #Wildlife #Turtle ... See MoreSee Less

Rhinos should fly upside-down, say veterinarianS--it’s better for their breathing and circulation than moving them by truck. Read the full story in our Dispatch 👉🏼 https://bit.ly/3mGO1HK #ConservationFirst #Wildlife #Rhino ... See MoreSee Less