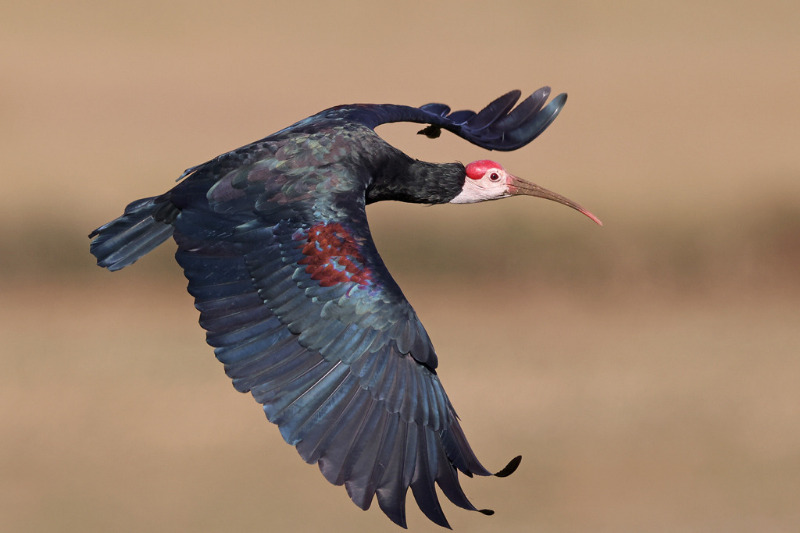 The Southern Bald Ibis Species Champion Project of BirdLife South Africa includes the monitoring of breeding colonies, an awareness program at schools within the bird’s core range, and the artificial nesting project in Ingula Nature Reserve.

Bald ibises belong to the genus Geronticus, derived from the Greek word gérontos meaning old man—as reference to their bald heads. The non-migratory Southern Bald Ibis (Geronticus calvus) is endemic to a restricted region in southeastern Africa. The Southern Bald Ibis’ most notable feature is the clownish red skull cap, distinguishing it from its very close cousin, Geronticus eremita, the Northern Bald Ibis, which looks like an aging rockstar with a mohawk-style neck crest of elongated feathers (Conservation Frontlines will bring you a story on the Northern Bald Ibis soon).

The Southern Bald Ibis core distribution range is located mainly in South Africa (from Limpopo, the northeastern Free State, Mpumalanga, to Kwazulu-Natal), although a significant part extends into Lesotho, and some occur in Swaziland. (Locally it’s known as Kalkoenibis in Afrikaans; Umcwangele  in Xhosa]; uNkondlo in Zulu; Lesuhla-ngeto, Mokhotlo in South Sotho.) 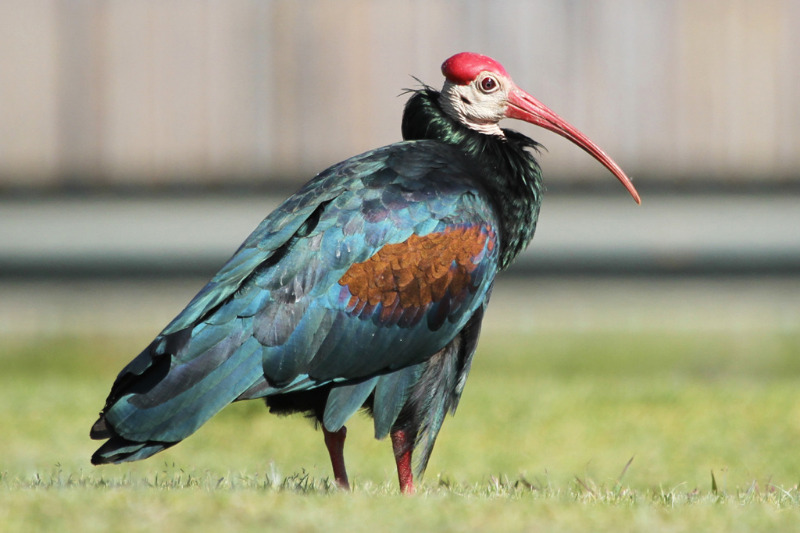 As already mentioned, the distinguishing feature in mature Southern Bald Ibis is the clearly visible crown—naked, bright red and domed. The rest of the head and upper neck, also naked, are whitish-beige. The long, downward curving bill is dull-red; the eyes are reddish. In direct sunlight, the dark plumage shines glossy green-blue, with a maroon-copper iridescence on the shoulder. The birds’ mass ranges from 1 to 1.3 kilograms; the length is between 70 and 80 centimeters, and the wingspan between 125 and 135 centimeters.

The Southern Bald Ibis population is estimated at 6,592 individuals, with a declining trend. About half are breeding individuals, occupying ca. 245 nesting colonies (about a third of historical nesting sites are no longer utilized, due to the decline in breeding adults). The species is classified “Vulnerable” by IUCN, and listed in CITES App II. 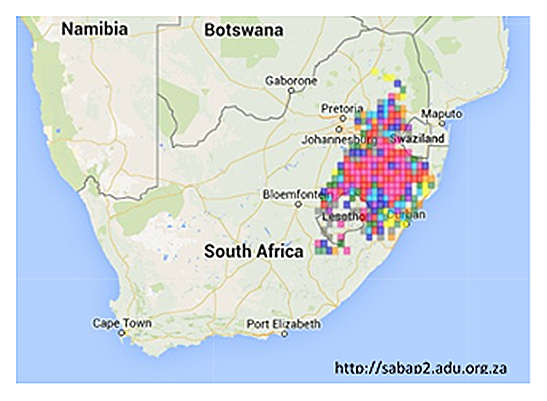 Throughout its 257,000km2 breeding range, the major concern is loss of wetland habitat through degradation and fragmentation, intensive crop farming, afforestation, invasive flora encroachment, open cast mining and expansion of human settlements. Since 1990 available suitable habitat has declined by 14.3%; by the year 2050, climate change will lead to additional habitat shrinkage of ca. 34.4%.

Another significant threat is the illegal harvesting of eggs and young chicks for subsistence, traditional medicine, and ceremonial purposes. The disturbance caused by removal of eggs and chicks may lead to breeding sites being abandoned over time.

As a gregarious species, Southern Bald Ibis breed communally; colonies—two to 100 nests per site—are usually located on cliff ledges, in potholes on mountain slopes, along riverine gorges, or on a waterfall face. The breeding season lasts from July to December, with a peak in August and September (often correlating with burnt grassland availability). 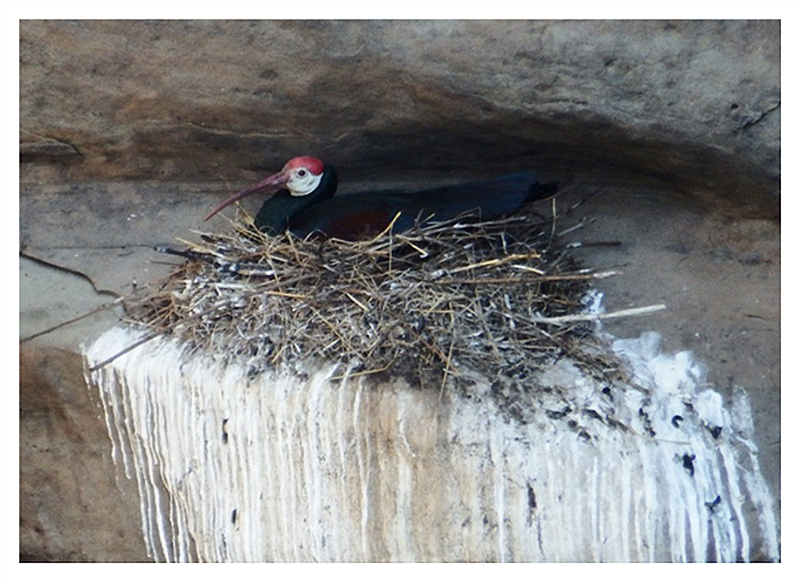 The clutch size varies between 1-3 eggs. The survival of multiple fledglings from the same nest is rare (apart from predation by white-necked raven and jackal buzzard, substantial losses are recorded during very wet years, when breeding colonies are flooded or washed out—the very reason why the birds choose cliff ledges for nesting). The South African fledgling survival rate (2004-2010) across 21 colonies was as low as 0.47.

Eskom, the national electricity supplier, supported this conservation work through various initiatives, including a satellite tracking project. The latter served to determine the movement patterns of Southern Bald Ibis across seasons, where and how far these birds fly for foraging, and to what extent they return to natal sites to roost and/or nest. In 2014, two juvenile birds were fitted with satellite trackers. The tracking data shed light on their behavior, life history and fine scale habitat requirements. One tracking device failed after four months, whereas the second one provided consistent data for 30 months.

Among the action plan’s objectives are various facets including:

BirdLife SA supporters and citizen scientists were involved in a largescale monitoring program between 2010 and 2015. Surveys of significant breeding colonies, and annual breeding assessments were made in cooperation with local Bird Clubs. Data for 224 breeding colonies across South Africa and Lesotho have now been collated, and are included in the Southern Bald Ibis database. These data are analyzed periodically to determine any changes in breeding success or distribution. For the areas which are still unmonitored (or unknown to the project), citizen scientists should relay information to BirdLife SA’s Carina Pienaar (she’s driving the project since 2004). Very important is also the recruitment of rural community members living near to breeding cliffs (this will rise awareness and buy-in at grass-root levels).

After realizing that the waterfall home of a substantial Southern Bald Ibis breeding colony on the Ingula Pumped Storage Scheme (a pumped-storage power station on the Drakensberg escarpment in Kwazulu-Natal, South Africa) would be inundated with the construction of the Bedford Dam, a special relocation program was implemented. Eskom, recognizing the importance of this breeding colony, supported the creation of an artificial nesting ledge in 2010—a first for this species. 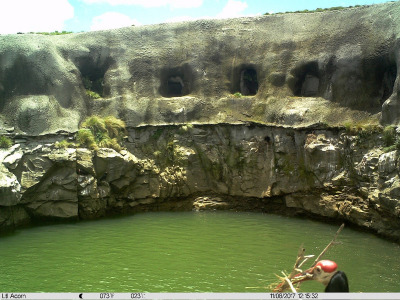 The original nesting site was flooded with the partial filling of the Bedford Reservoir in June 2015 (during the breeding season). Fortunately, the birds began use the artificial nest holes above the rock ledges. Since relocation, four successful fledglings have been recorded. Annual monitoring tests the effectiveness of this intervention and provides invaluable lessons regarding future development of artificial nesting ledges.

In 2019 up to 30 adults used the artificial site for roosting. A sudden increase in breeding activity was noted in 2020, with nine nests in total, and 13 chicks reaching fledging age. Three of the nests were located in the artificial potholes. This success is noteworthy for several reasons: after the previous four breeding seasons had consistently produced four chicks, it was thought that the site’s capacity had been reached. And although the potholes apparently provided valuable shelter from the elements for adults and fledglings, their design seemed to lack certain characteristics that would have made them suitable for nesting. Both assumptions were proved wrong. Nests in the potholes produced four of the 13 chicks that fledged.

In 2020, a research team lead by Dr Kyle Lloyd was able to ring 10 of the 13 juveniles. Two chicks received new GSM tracking devices, designed and fitted by Craig Nattrass. These juveniles will form part of a study of breeding success, the post-fledging spatial distribution and movement, habitat preference and use.

The BirdLife SA Southern Bald Ibis project ensures a new lease on life for this very special and iconic bird of the high grassland of Southern Africa.