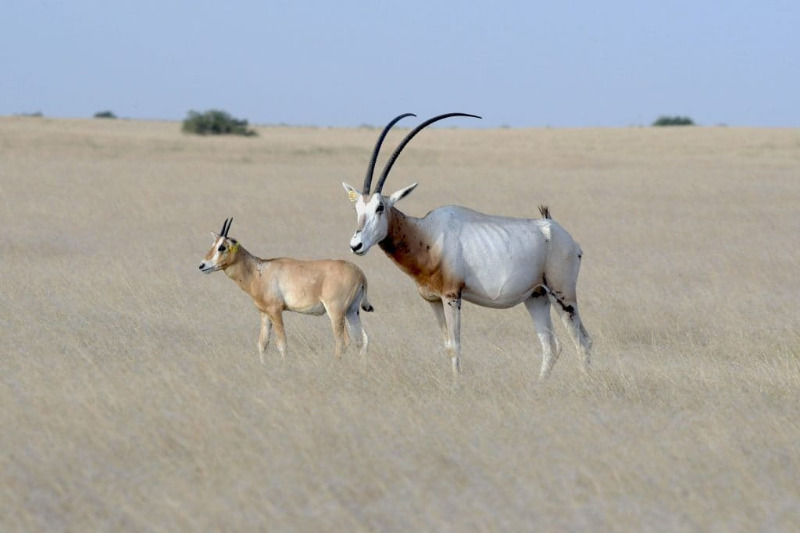 Scimitar-horned oryx once occurred across the sub-desert belt of Africa. Now extinct in the wild due to a lethal combination of overhunting, drought and habitat loss, its reintroduction in Chad provides hope.

On March 14, 2016, twenty-five scimitar-horned oryx set foot on Chadian soil after an absence of almost 40 years. Welcomed home like long-lost sons and daughters, the oryxs’ return was the fruit of cooperation between many players working hand in hand under the leadership of the Government of Chad and the Environment Agency Abu Dhabi.

Five years on and eight shipments later, a further 200 oryx have joined the initial twenty-five. Today, more than 370 oryx roam free in the Ouadi Rimé-Ouadi Achim Game Reserve, edging us closer and closer to our initial milestone of 500 breeding adults. Ultimately, we want to see so many healthy and secure oryx that their conservation status is assessed by the Red List and reclassified from Extinct in the Wild to a lower category of threat.

Of the initial 25 founders, at least 16 and possibly 19 are still alive. One female has produced five calves, and others have performed similarly, producing a total of 42 calves, of which most have survived.

Conservation of wildlife and the restoration of extinct or critically endangered species is not a simple, one-off undertaking but a constant battle requiring major and permanent commitment. Overhunting saw the oryx disappear from Africa in the 1980s but there will always be new threats and new challenges moving forwards. Bushfire is now a major concern, something that seldom occurred in the past. Solid partnership has so far enabled us to achieve some truly remarkable results and it is this same spirit of working together that will ensure the growth and prosperity of the oryx population and its struggle back from the brink.

John Newby is the founding CEO of the Sahara Conservation Fund SCF. After retiring from this function, he continues serving as senior adviser. SCF works to conserve the wildlife, habitats and other natural resources of the Sahara and its bordering Sahelian grasslands.