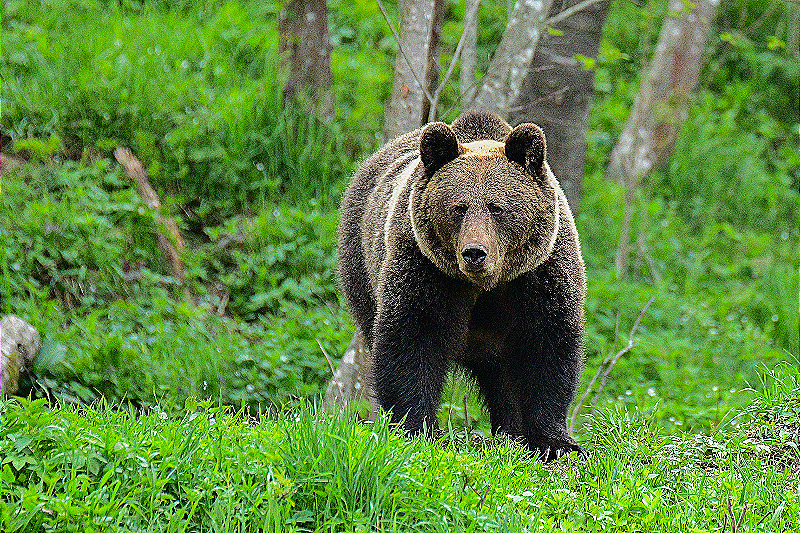 The largest country in Europe, Ukraine is home to significant species, biodiversity and habitat.

Ukraine’s vast array of habitats support iconic wildlife species which may be threatened by the current conflict that has engulfed the country. Located in Eastern Europe and bordering the Black Sea, Ukraine covers 233,062 square miles (603,628 sq km) and contains nearly 3,000 square miles (4,828 sq km) of protected nature preserves and national parks. The country primarily consists of fertile steppes and mixed forests. To the west and south, mountainous areas lead to a variety of habitats. Ukraine established one of the first nature reserves in the world. More than 45,000 faunal species have been reported in the country, 354 of which are endangered.

According to The Economist, the Russian invasion of Ukraine poses a great risk to wildlife research and biodiversity, particularly in the Chernobyl Exclusion Zone. Conflict has already halted research projects, destroyed equipment and experiments, and possibly damaged study sites permanently. Unfortunately, this tragedy may not just affect the Chernobyl area—it could threaten wildlife and biologists throughout Ukraine.

Eurasian Brown Bears
Closely related to the North American grizzly bear (Ursus arctos horribilis), the Eurasian brown bear (Ursus arctos arctos) has a stable European population of some 200,000 individuals. However, isolated populations in Ukraine, totaling 150 to 250 individuals, have been a concern for years as the bears struggle to gain sufficient numbers. Brown bears inhabit the Carpathian Mountains in western Ukraine and have recently appeared in the Chernobyl Exclusion Zone. This suggests that the absence of human activity has a positive effect on vulnerable bear populations.

Conflict in Ukraine also poses the threat of deforestation, either by Russian occupiers or because of combat. Researchers report that forest corridors on the Ukrainian-Romanian border are necessary for the bears to come in contact with much larger and more stable bear populations in Romania. More contact meant more gene flow and a greater reproductive rate.

According to Ukrainian conservationists, “The Ukrainian Carpathian Mountains are crucial for . . . ecological connectivity . . . [as they form] a bottleneck for animal migration.” Several important places for study have been pinpointed in areas where Ukraine borders Romania and Poland. Current efforts to sustain corridors like these include the Alps-Carpathian Corridor Project, which works to establish uninterrupted pathways for wildlife. Furthermore, bears in the Carpathian Mountains have long been affected by poaching, which may become a more significant issue if conflict continues. The uncertain future of brown bears in Ukraine warrants careful attention to these forest corridors and to future actions to protect this species. 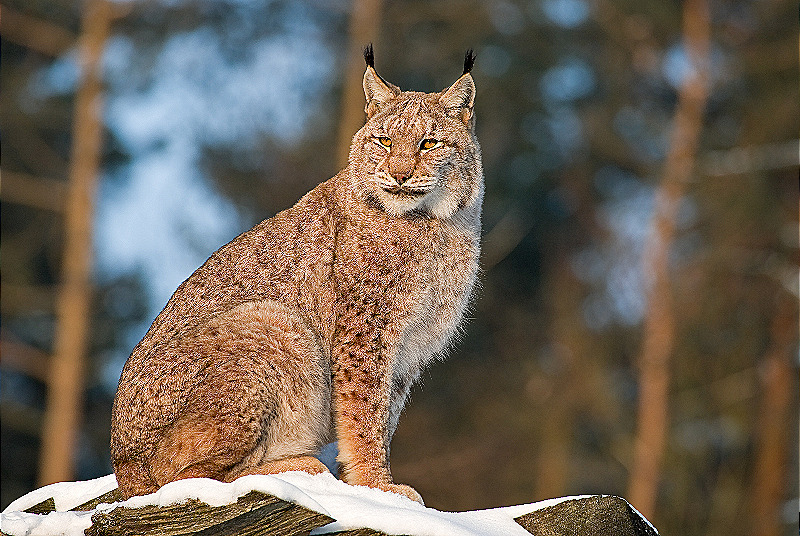 Imposing looking Eurasian lynx can be found in western and northern Ukraine.

Eurasian Lynx
As with the brown bear population, Eurasian Lynx (Lynx lynx) are present in low numbers in Ukraine. It is estimated there are about 500 lynx spread throughout western and northern Ukraine, mainly in the Carpathian Mountains and the Polyssia region, including the Chernobyl Exclusion Zone. Lynx have been protected since the 1970s. However, they remain a highly endangered species due to slow reproduction and sensitivity to human disruption. According to WFF Central and Eastern Europe, proper funding of conservation programs is critical.

Conservationists have concluded that the key to protecting Ukrainian lynx is to link them with other populations throughout Eastern Europe. They believe there is a chance of full recovery if Ukrainian lynx can travel between well-established populations. The result would include increasing their reproductive rate and decreasing the risk for inbreeding. The risk lynx face now is that conservation programs may be halted, and their populations may be pushed into isolation amid conflict. 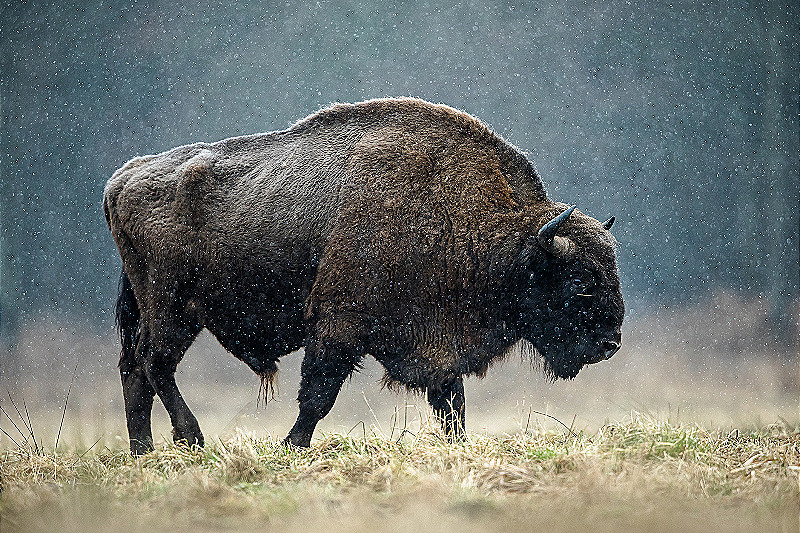 Scattered herds of European bison have been preserved in Ukraine.

European Bison
European bison (Bison bison bonasus) are the largest land animal in Europe and have historically inhabited forest and plains regions throughout much of the continent. Currently some seven populations exist throughout Ukraine, totaling approximately 350 individuals. The bison now face a dual threat: Poaching may rise because of the war, and management practices will likely cease until the country regains stability

Conservation efforts have shown that without funding for management programs, bison populations in Ukraine cannot survive in the wild. Bison in the Carpathian region are heavily reliant upon forestry workers for food, in order to minimize human contact in farming areas. Bison are also susceptible to disease (due to low genetic diversity) and require veterinary monitoring. Fortunately, the conservation efforts of other countries has led to great success for European bison. This offers hope for the survival of bison populations in Ukraine.

Askania-Nova Nature Preserve
Ukraine’s Askania-Nova was one of the first nature reserves to be established in the world. Located just north of the Crimean Peninsula, it covers about 130 square miles and holds more than 3,500 plant and animal species. In the early 20th Century, conservation efforts there helped save saiga antelope and Przewalski’s horse from extinction. Since then, the reserve has become an important area for experimentation to save endangered species, including breeding programs between European and American bison (Bison bison bison) to improve genetic diversity. As well as being a haven for wildlife, since the late 19th Century this area has spared virgin steppe lands from agriculture and industry, protecting valuable habitat. 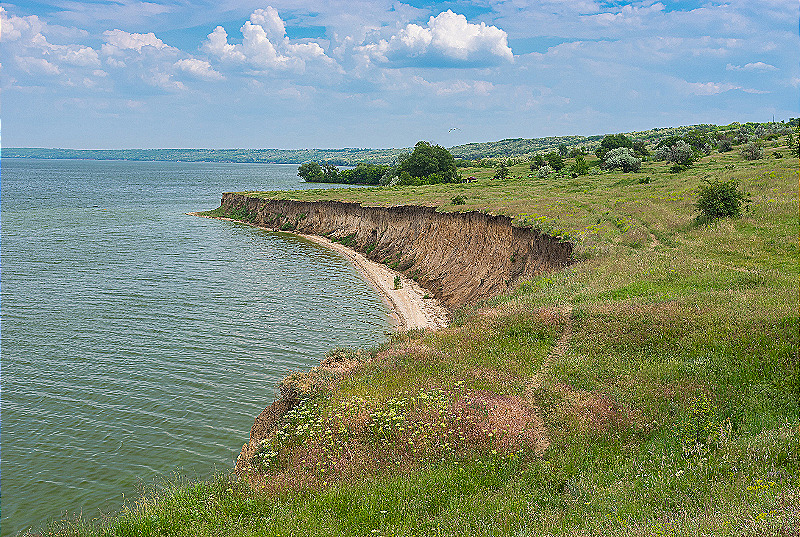 A view of the breadth of Great Meadow National Nature Park.

Great Meadow National Nature Park
This nature preserve, established in 2006, lies on the southern bank of the Dnieper River’s Kakhovka Reservoir in southwestern Ukraine, a region currently occupied by Russian troops. Wetlands, meadows and reed beds around the reservoir hold high levels of biodiversity. The park remains one of the largest migration spots for birds in Europe. There are over 150 species of migratory birds in Ukraine alone and many more species of northern European birds are found around the Black Sea. Askania-Nova provides habitats and rich resources for over-wintering birds. Migratory birds would be affected by any loss of habitat in this preserve, either to agriculture, industry, or conflict, resulting in avian population declines throughout Europe. 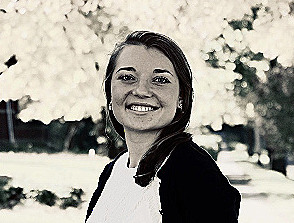 Editor’s Note: The Conservation Frontlines team understands that wildlife issues will never take priority over humanitarian crises and the loss of wildlife will always come second to the loss of human life. But we hope that in the future conservation efforts will be re-started in Ukraine in order to save wildlife and habitats.